"Banditry appears to be on the decline in recent years, with most criminal acts being perpetrated not by outsiders, but by natives, such as the "Naga" thugs of Argonian stock."
―Imperial Geographic Society[src]

The Naga are a breed of Argonian[1] who resemble puff adders with legs and arms and whose height ranges from seven to eight feet tall. They possess black scales, black eyes, and large mouths full of fangs. They generally live in the inner swamps of Black Marsh and have very little contact with the Imperials and other races that are not native to Black Marsh.[2]

During the Third Era, the Naga gained a reputation of being thugs who committed the majority of crime in Black Marsh. Among other things, the Naga committed criminal actions such as raiding trade and passenger caravans on the roads of Black Marsh, smuggling powerful drugs across the borders of Black Marsh to and from Cyrodiil and Morrowind,[1] and kidnapping, robbing, and murdering wealthy Imperials.[2]

The Naga reside in Murkmire, a region in central Black Marsh.[3] 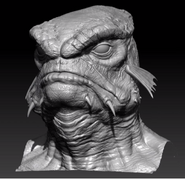 Front of a Naga's head model 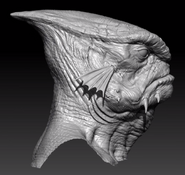 Side of a Naga's head model

The Dead-Water Tribe of Naga are in North Murkmire.
Add a photo to this gallery

Retrieved from "https://elderscrolls.fandom.com/wiki/Naga?oldid=2751294"
*Disclosure: Some of the links above are affiliate links, meaning, at no additional cost to you, Fandom will earn a commission if you click through and make a purchase. Community content is available under CC-BY-SA unless otherwise noted.