Not to be confused with Narsis Dren.

"Narsis weaves it web of sleep upon all those who enter, for the Dark Elves of Narsis discourage visitors."
―Description in Arena[src]

Narsis or Narsis-Where-All-Fervently-Praise-the-Prophet-Veloth[1] is one of the eight major cities in Morrowind and the capital of the Redolent Loam region of the Deshaan. Narsis is the capital of the Former Great House Hlaalu, a political house that has strong ties to the Imperials of Cyrodiil and holdings in places such as Vvardenfell and Stonefalls.

Narsis is located on the southern banks of Lake Hlaalu, which is the epicenter of the Redolent Loam region in Deshaan. Narsis is also one of the smaller cities found in Morrowind, but it still manages to stay active with the flow of trade coming in and out of Narsis. The Hlaalu Kinhouse is the seat of political power in Narsis and it is located on the northern end of the city. The Narsis Bazaar is located on the western end of town, and it is where all the magic happens in Narsis, all of the trade occurs in the merchant corner.

During the War of the First Council, Wulfharth Ash-King advanced from the northwest, past modern-day Fort Virak to eventually arrive onto the westernmost bank of the Inner Sea in Zabamat. Scouts came back to Wulfharth with news that the Chimeri forces had left Narsis to join the Dwemer to defeat the Nords. The conflict eventually moved to Red Mountain and the Battle of Red Mountain commenced.[2]

In 2E 559, House Hlaalu and House Dres advanced beyond their political borders and had several disputes near the border to Shadowfen, Black Marsh. The battle between the two Great Houses was memorable for its scope and its casualties. Narsis' Hlaalu wanted to build a trading post in disputed territory while Tear's Dres did not want to see the light of day. House Dres sent a militia of Dres mercenaries that surrounded the Hlaalu Workers. Purilla Falen of the Hlaalu Guard defended the outpost and used the only mage there to build a portal to Narsis for reinforcements. Falen's Guard managed to hold the Dres back until the Narsis Merchant-Warriors came pouring into the trading post and defeated the Dres Mercenaries. Purilla Falen was honored by the Council of House Hlaalu and died in combat.[3]

During the Interregnum in 2E 582, the Llodos Plague has swept throughout the Deshaan Countryside and had affected many settlements such as Serkamora and Muth Gnaar. The city of Narsis went into lockdown to avoid the spread of the plague into Narsis. Councilor Ralden Hlaalu and Giron Sadri were in charge of the situation and noticed a sudden decrease in people living in Narsis. Before the lockdown, many residents fled to Mournhold to escape the plague but when the lockdown occurred, the resident count should have remained stagnant, but it started to decrease when people began to go missing. A mysterious traveler that was known as the Vestige appeared in Narsis and was ordered by Ralden to investigate the situation.[4]

The Vestige and an agent of the Morag Tong discovered a Daedric Cult known as the Maulborn on the eastern shores of Lake Hlaalu, dumping a strange concoction known as Plague Husk Scent into the lake. This was to destroy Narsis' water supply. It was later revealed that Giron Sadri was allied with the Maulborn and deliberately brought the Llodos Plague into Narsis. The Vestige encountered Sadri in the nearby Narsis Ruins and defeated him in combat. Narsis was saved from the Llodos Plague, but the Plague Husk Scent was tested on Narsis to be eventually used in Mournhold. The Ebonheart Pact was notified and advanced to the Obsidian Gorge to deal with the creator of the plague, Merdyndril.[5][6]

During the Imperial Simulacrum in 3E 399, the city of Narsis was one of the eight major kingdoms in Morrowind, and it was under the rule of Queen Vermothah. Narsis was connected to several townships including Heimlyn Keep, Old Keep, and the city of Stormhold in Black Marsh. At one point, the Eternal Champion had visited the city in their quest for a piece of the Staff of Chaos to defeat Jagar Tharn in the Imperial Palace.[7]

In 4E 5, the Ministry of Truth had fallen onto the city of Vivec as a result of the Nerevarine Prophecy being fulfilled. The Ministry began to fall in 3E 427 when Vivec of the False Tribunal disappeared without a trace, but it was kept in the air by a device known as the Ingenium. The device was built by Lord Vuhon of Umbriel, and it was powered by souls. A woman named Ilzheven was taken to power the Ingenium, but her lover, Ezhmaar Sul prevented this and inadvertently damaged the Ingenium, resulting in the Ministry dropping onto Vivec City. The meteor destroyed Vivec City and killed many citizens living in the city; the impact left a huge crater that filled up with water that became known as the Scathing Bay. The destruction shook the entirety of Morrowind and affected locations far from Vvardenfell. The area around Narsis was suspiciously quiet until after the Ministry crashed onto Vivec and the region was hit by a series of tremors.[8][9] 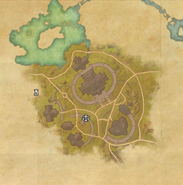 Map of Narsis with Lake Hlaalu to the north circa 2E 582.
Add a photo to this gallery

Notice: The following are unlicensed references. They are not copyrighted by a ZeniMax Media company, but can still be considered part of The Elder Scrolls lore and are included for completeness.
Retrieved from "https://elderscrolls.fandom.com/wiki/Narsis?oldid=3160156"
*Disclosure: Some of the links above are affiliate links, meaning, at no additional cost to you, Fandom will earn a commission if you click through and make a purchase. Community content is available under CC-BY-SA unless otherwise noted.