Buying special feathers from The Impresario

"Traditionally found roaming the isle of Summerset, Indriks are especially powerful magical creatures, and they can provide a challenge for even the most experienced adventurers. While it is possible to hunt them in the wild, it is now also possible to acquire one as a mount too."
―In-game description [src]

Nascent Indriks are special mounts that can be summoned by combining four magical feathers bought from the Impresario, as illustrated in the Scroll, Indrik Life Cycle. Once summoned, the Nascent Indrik can be further evolved into one of four variants by feeding it certain berries.

In order to acquire the Nascent Indrik mount, the Vestige needs to collect all four of the indrik feathers:

There are four possible evolutions for the Nascent Indrik, and to make it evolve, as detailed in Memorandum: Indrik Emergence & Formal Development, the Vestige needs to feed the indrik with enchanted berries. These enchanted berries are sold by the Impresario, each for 10 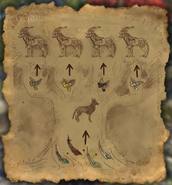 Promotional image of the Indriks
Add a photo to this gallery

Retrieved from "https://elderscrolls.fandom.com/wiki/Nascent_Indrik?oldid=3092945"
*Disclosure: Some of the links above are affiliate links, meaning, at no additional cost to you, Fandom will earn a commission if you click through and make a purchase. Community content is available under CC-BY-SA unless otherwise noted.