For this location in Online, see Juras' Fall.

Nenyond Twyll is a location in The Elder Scrolls IV: Oblivion. It is an Ayleid Ruin located west of Faregyl Inn.

On appearance, there seems to be no enemies in the entire ruin. As the Hero reaches the end of the ruin, they will notice an Ayleid Statue. After taking the statue and beginning the journey back through the ruin, zombies appear.

During the quest, Liberation or Apprehension?, the ruins are host to several necromancers, some zombies, and a few ghosts. There is also a push block that in order to discover the fate of Mucianus Allias, who was transformed into a zombie by the necromancers.

As part of their further investigation of the necromancers and the deaths of their two mages, Raminus Polus asks that the Hero head to Dark Fissure cave to find out more about the Black Soul Gems. 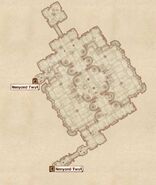 Retrieved from "https://elderscrolls.fandom.com/wiki/Nenyond_Twyll?oldid=2974678"
*Disclosure: Some of the links above are affiliate links, meaning, at no additional cost to you, Fandom will earn a commission if you click through and make a purchase. Community content is available under CC-BY-SA unless otherwise noted.