For other uses, see Netch.

Netch are jellyfish-like creatures that appear in The Elder Scrolls V: Dragonborn. They are neutral creatures, and stay docile even when bumped into. If they are attacked, netch will immediately turn hostile towards the Dragonborn.

"Netch are often domesticated on the Morrowind mainland. Wild netch were first sighted on Solstheim several decades ago, perhaps drawn by the familiar flora that has grown up in the southern ashlands."
―Loading Screens[src]

In Morrowind, Netch are often domesticated and raised for their meat and jelly. They can be deadly opponents to face as their flesh is poisonous, and their tentacles contain nematocysts filled with venom. So powerful are these nematocysts that they can still be felt as throb on the skin in leather made months after the creature's death.[1]

"Netch are often domesticated on the Morrowind mainland. Wild netch were first sighted on Solstheim several decades ago, perhaps drawn by the familiar flora that has grown up in the southern ashlands."
―Loading screen[src]

Commonly found near water in the southern regions of Solstheim, netch are often found in groups of three to four, usually consisting of two adults and one or two calves. Larger or smaller groups can be found as well. Also quite a few can be found at a waterfall on the western side of Solstheim just north-west of the Water Stone, very close to one of the ancient chests in the quest "Deathbrand."

"The giant air-floaters from the dark elf lands. Only the brave dare to hunt them, only the strong survive them."
―Hunter[src]

Netch are passive until something attacks them first. When threatened they will ram into enemies and attack with their tentacles, dealing considerable shock damage. Netch can be a challenge to fight when they are over water since attacks are not possible while submerged without Ahzidal's Boots of Waterwalking. They are capable of quite easily killing low-level characters, as well as any Hunters or Reavers who attack them.

One of the easiest ways to deal with them is to use Marked for Death (of any level) two or three times. This will lower their defense and make them flee from the attacker. Try to separate them from their group to make the battle easier. While waiting for the Shout to recharge, provoke them to attack the Dragonborn and quickly sprint behind them. Shoot them with bow or crossbow several times after their defense has been lowered enough to kill them. 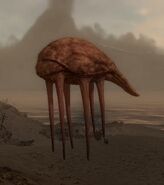 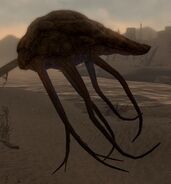 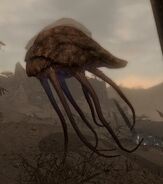