Orcish Invader
Vaermina Devotee
Nightcaller Temple is a fort in The Elder Scrolls V: Skyrim. Also known as the Tower of Dawn, it is a ruin located on a mountain top overlooking Dawnstar from the east.

Erandur refers to the temple as a ruin within a ruin. First used as a military fort, then occupied by worshippers of Vaermina, both times it has fallen into disrepair and disuse.

Long ago, a band of Orcs invaded the tower and had a bloody conflict with all those dwelling inside. As a last-ditch effort to prevent the Orcs from seizing the inner sanctum in which the Skull of Corruption stands, the priests released "the Miasma," a gas which instantly puts all those who inhale it into an unbreakable deep hibernation while also keeping those slumbering perfectly preserved. Unfortunately, the longer one stays asleep due to "the Miasma," the more their mind breaks down. As such, upon entering the tower and breaking the air-tight seal, "the Miasma" dissipates, allowing the Orcs and the Priests to awaken and begin attacking in a frenzy, not able to tell the difference between friend and foe.

Speaking to Erandur, a priest of Mara, in the Windpeak Inn in Dawnstar will begin the Daedric Quest to end the nightmares, Waking Nightmare, which involves a visit to Nightcaller Temple.

Erandur established a small shrine to Mara within the tower's entry hall, hoping to seek her guidance. Upon entering the shrine, the priest explains how the Skull is the source of everyone's nightmares, since it devours dreams and memories for Vaermina to collect.

If the quest Waking Nightmare is completed without killing Erandur, Erandur may be found at the meager shrine in the entry hall. He is available as a follower. 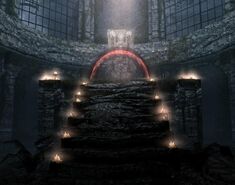 Retrieved from "https://elderscrolls.fandom.com/wiki/Nightcaller_Temple?oldid=2994780"
*Disclosure: Some of the links above are affiliate links, meaning, at no additional cost to you, Fandom will earn a commission if you click through and make a purchase. Community content is available under CC-BY-SA unless otherwise noted.