The Nightingale Armor is a unique light armor set that appears in The Elder Scrolls V: Skyrim. The armor is the trademark of the Nightingales, a shadowy faction dedicated to the service of the Daedric Prince Nocturnal. The faction is reformed during the course of the Thieves Guild questline and The Dragonborn is given a set of the armor before being inducted into the group.

Because the armor is leveled, the magnitude of the enchantments and value are contingent upon character level.

The full set is given to the Dragonborn by Karliah before performing the initiation ritual of the Nightingales during the quest "Trinity Restored" for the Thieves Guild. All pieces are obtained when activating the Armor Stone, emblazoned with the Nightingales symbol, inside the Nightingale Hall.

Each piece bears an enchantment, the magnitude of which is dependent on character level. Three tiers of armor are available and the set with the strongest enchantments can be obtained after level 32. The character level when the quest "Trinity Restored" is started determines which tier of armor will be granted.

All pieces can be upgraded at a workbench with void salts and the Arcane Blacksmith perk, however they do not benefit from any Smithing perks. This means they cannot be improved past flawless quality without boosting the Smithing skill over 100. This can be achieved by using enchanted items and/or blacksmithing potions to fortify Smithing. 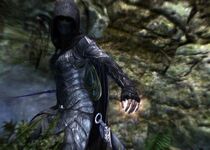 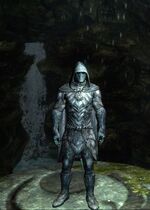 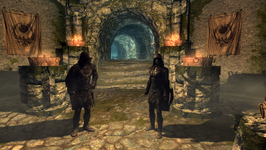 Brynjolf and Karliah in the Armor

Retrieved from "https://elderscrolls.fandom.com/wiki/Nightingale_Armor?oldid=3156547"
*Disclosure: Some of the links above are affiliate links, meaning, at no additional cost to you, Fandom will earn a commission if you click through and make a purchase. Community content is available under CC-BY-SA unless otherwise noted.