For other uses, see Nightshade.

Nightshade is an ingredient in The Elder Scrolls V: Skyrim. It can be used to make potions at an alchemy lab as part of alchemy.

"The name and shape of this plant are known to all; long understood to be one of the more potent components in many poisons, the average Nord keeps his distance from the bright purple flowers nestled among dark leaves. It is exceedingly effective as a pure poison, but can also be combined with other compounds to stiffen joints as well. It is thus favored amongst those who wish to disable their opponents in battle, and can be found coating the blades of many of the more unsavory characters in Skyrim"
―Agneta Falia[src]

Few and Far Between[]

Nightshade are flowering plants that can be found throughout Skyrim, normally around cemeteries or graveyards. 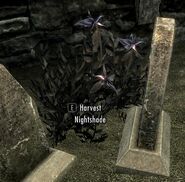 Deutsch Español Italiano Nederlands Polski Русский
*Disclosure: Some of the links above are affiliate links, meaning, at no additional cost to you, Fandom will earn a commission if you click through and make a purchase. Community content is available under CC-BY-SA unless otherwise noted.
Advertisement