For other uses, see Ninendava.

Ninendava is a small Ayleid Ruin located west of Bruma, northeast of Sancre Tor. It contains one Ayleid Statue, which is located north of the entrance up a flight of stairs in the very back room.

There is one Ayleid trap inside. As in all Ayleid ruins, there are a few Ayleid casks with various radiant items inside them.

In the early days of the Alessian Rebellion, Pelinal Whitestrake smashed the head of the Ayleid king Gordhaur the Shaper in a goat-faced altar in Ninendava, then cursed his body with a plague spell so he would not return to life.[1] The altar was presumably used during Daedric rituals involving the Ninendava Sacred Goat.

Lord Umbacano of Umbacano Manor in the Talos Plaza District is a collector of rare Ayleid antiquities. 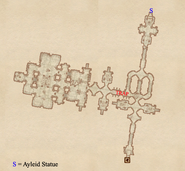 Ninendava Map
Add a photo to this gallery

Retrieved from "https://elderscrolls.fandom.com/wiki/Ninendava_(Oblivion)?oldid=2940271"
*Disclosure: Some of the links above are affiliate links, meaning, at no additional cost to you, Fandom will earn a commission if you click through and make a purchase. Community content is available under CC-BY-SA unless otherwise noted.