Nirn is referred to by otherworldly beings as the mortal plane and sometimes poetically called "Mundus" by both mortals and Daedric lords.[1] The exact reasons and specifics behind Nirn's creation are largely uncertain. However, all agree that the deity Lorkhan and the Eight Divines played pivotal roles in the creation of the waterlogged planet.[2][3][4] Two moons, Secunda and Masser, orbit Nirn. They are Lorkhan's sundered corpus.[2] Nirn is the center of Mundus, which itself is the "hub" of The Elder Scrolls universe's "wheel." The heavens beyond Nirn are star-filled. These stars are holes or portals through Oblivion to Aetherius, and carry magical significance due to the beings which tore them open, the Magna Ge.

There are many theories on how Lorkhan created Nirn; ranging from the other Aedra agreeing to willfully help, to Lorkhan tricking them into it.[5] However, it is universally acknowledged that the Aedra gave their energy and power over to it, that the majority gave up on the project after realizing the cost and became the Daedric Princes, while those who willingly helped became the Eight Divines.[6] In Oblivion, Mankar Camoran proclaims that Nirn is possibly an extension of the realm of Oblivion.[7]

Solar eclipses happen multiple times a year across Nirn. They are known as "Vampire Days."[8]

It is never stated, but can safely be assumed, that Nirn's axial tilt is negligible, since days and nights remain more or less the same length throughout the year, even in the northern part of Skyrim. There also appears to be minimal variation in climate from month to month.

The northern regions are frigid. The land of Atmora, far to the north of Skyrim, is said to be primarily a frozen plain.[9] Skyrim, and, by some extension, Bruma, are typically snowy, especially farther north, towards Winterhold.[10][11][7] Closer to the equator lies Elsweyr and Black Marsh, relatively tropical and warm locations.

Snow and rain are common forms of precipitation on Nirn. Certain areas in northern Tamriel, such as Skyrim and Solstheim, experience rare Auroras, colorful waves of energy in the night sky.

The planet has a notably large continent, Tamriel, which is where all of The Elder Scrolls activity takes place, with another similarly large continent to the east, named Akavir. The land masses are separated by the Padomaic Ocean, a massive saline body of water.

Tamriel is geographically diverse: it has mountains, tundras, cold and hot deserts, swampy regions, grasslands, tropical rainforests, and a large volcano. The diversity of biomes is unique as the hot desert is bordered by cold mountains to the north.

Also known as "Dawn's Beauty" in the language of the Altmer, Tamriel also has an archipelago of islands called the Summerset Isles, which became the home of the Altmer, or "High Elves," after they abandoned their original homeland of Aldmeris.

Not much is known about Yokuda since it was nearly obliterated in an unknown cataclysmic event, but it seems to have a dull, rocky, hilly, desert landscape. It is known to be the original home to the Redguards before they rendered it uninhabitable.[UL 1]

Atmora is a barren and frozen wasteland. It is this extreme cold that caused the water of the Sea of Ghosts that separates Tamriel and Atmora to become icy. This frozen land is also where the Nords of Skyrim are originally from, although not many trips back are made.

Next to nothing is known about the geography of Akavir. It is known that the continent is split into four warring kingdoms, each boasting its own race: Tang Mo, Kamal, Ka Po' Tun, and Tsaesci. Akavir is known to have been one of the original homes of the dragons.[12] The Blades were originally from Akavir, where they were known as the Dragonguard, but turned to serve Reman Cyrodiil in their search for a Dragonborn.[13]

Pyandonea is the island-continent located to the far south-west of Tamriel and home to the elusive Maormer. The island consists of dense rainforests, which provide shelter for the southern water spirits. Due to its populace being primarily elves, there is speculation that Pyandonea may, in fact, be part of Tamriel.

Thras, also known as the Coral Kingdom, has been a powerful, antagonizing power against the Summerset Isles since before recorded time. The Sload may at one time have even called Summerset part of Thras.

Little is known about Aldmeris, including if it still exists. The Altmer claim that this continent was the birthplace of both elves and mankind. 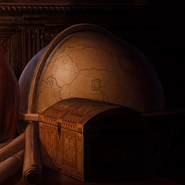 The pre-release art for the Summerset Orrery in The Elder Scrolls: Legends; the continents were later removed.
Add a photo to this gallery

Notice: The following are unlicensed references. They are not copyrighted by a ZeniMax Media company, but can still be considered part of The Elder Scrolls lore and are included for completeness.
Retrieved from "https://elderscrolls.fandom.com/wiki/Nirn?oldid=3114970"
*Disclosure: Some of the links above are affiliate links, meaning, at no additional cost to you, Fandom will earn a commission if you click through and make a purchase. Community content is available under CC-BY-SA unless otherwise noted.