For other uses, see Nirnroot.

Nirnroot is an ingredient in The Elder Scrolls V: Skyrim. It can be used to make potions at an alchemy lab as part of alchemy.

Herbalist Chivius Regelliam noted that a solar event known as the Sun's Death severely depleted the presence of nirnoot in Tamriel, as it was a surface dwelling plant and needed the sun's rays in order to survive. One theory on how the plant survived is that the explosion of Red Mountain, mixed with the fertile soil of Cyrodiil, gave the soil healing properties, allowing the plant to "preserve itself" during the event and survive without light. The Dunmer used the volcanic ash mixed with soil as a cure for Blight, further supporting this theory. It is still unknown why nirnroot radiates a bluish-white glow, and is still today largely unstudied.[1]

"Nirnroot" is named because it is a root of Nirn, the planet on which The Elder Scrolls is set.

The Gourmet's recipe for Potage le Magnifique in his book, Uncommon Taste does not call for a nirnroot, but if the Dragonborn impersonates the cook at Castle Dour, during the Dark Brotherhood questline, a nirnroot can be added to the casserole as a secret ingredient. Gianna, the Castle's chief cook comments that nirnroot is a common spice in stews and other dishes.

"Nirnroot is the easiest. It grows only by the water and makes a unique chiming noise. The only drawback is it won't regrow after harvesting."
―Ingun Black-Briar[src]

Nirnroot can be found throughout Skyrim, usually along lake and river banks. The plant makes a sound somewhat akin to chimes and emits a white glow. The glow is faint in daylight, but very bright—even from a distance—after dark. crimson nirnroot, a cousin to nirnroot, also grows abundantly in Skyrim's Blackreach. A giant nirnroot variety can be found on Giant Nirnroot Island, in The Elder Scrolls V: Dragonborn.

Ingun Black-Briar, an Apprentice alchemist, asks the Dragonborn to obtain 20 nirnroot to help replenish the diminishing supply of her mentor and teacher. She also asks for 20 deathbell and 20 nightshade. 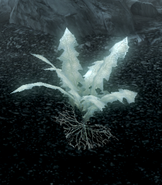 A Nirnroot, glowing at night.

A close up of the Nirnroot.
Add a photo to this gallery

Retrieved from "https://elderscrolls.fandom.com/wiki/Nirnroot_(Skyrim)?oldid=3086905"
*Disclosure: Some of the links above are affiliate links, meaning, at no additional cost to you, Fandom will earn a commission if you click through and make a purchase. Community content is available under CC-BY-SA unless otherwise noted.