For other uses, see Nix-Hound.

A Nix-Hound is a medium-sized arthropod predator which has been known to hunt in packs. The Nix-Hound is a gray, rangy quadruped with long, purple feeding spikes. Its cousin, the Rogue Nix-Hound, is larger and much more dangerous. Bandits and Reavers occasionally capture and attempt to train Nix Hounds; a few are seen in bandit caves and lairs, and fight alongside their bandit masters. 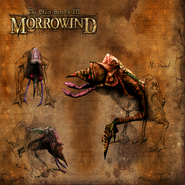 Retrieved from "https://elderscrolls.fandom.com/wiki/Nix-Hound_(Morrowind)?oldid=2765524"
*Disclosure: Some of the links above are affiliate links, meaning, at no additional cost to you, Fandom will earn a commission if you click through and make a purchase. Community content is available under CC-BY-SA unless otherwise noted.