Have a picture of Nocturnal (Online)? Then please upload it! For more information please consult our image policies

"Long ago, I brokered a truce with the Princes of Oblivion. This pact bound eight Princes to an oath―that they would never again set foot on Tamriel. Nocturnal was not present when the Princes signed the Coldharbour Compact. Thus she flouts its restrictions. Now, this is important―Nocturnal does not act alone."
―Sotha Sil[src]

Nocturnal, also called the Shadow Queen, is the Daedric Prince of night and darkness, and the patron god of thieves. Nocturnal was among the Princes who did not sign the Coldharbour Compact, which bound some Princes from manifesting on Mundus. Alongside her fellow Princes Clavicus Vile and Mephala, together dubbed "The Triad," she is responsible for the events of the Daedric War and is the main antagonist of The Elder Scrolls Online: Clockwork City and The Elder Scrolls Online: Summerset.

Inside "The Throne Aligned" of the Cognitum Centralis, once the Shadow of Sotha Sil is defeated, you will be quickly shrouded by shadows and awaken to Nocturnal's dark energy encroaching around Sotha Sil and the Skeleton Key. Proctor Luciana Pullo and the recently arrived Divayth Fyr will be fending off Nocturnal's powers, and have the following exchange:

Proctor Luciana Pullo: "Fyr? Where did you―? What are you doing?"
Divayth Fyr: "Never mind where I came from! I'm keeping Sil alive, you ungrateful shrew! We can't let the shadow escape!"
Luciana Pullo: "Just hurry! I can't hold the light for long!"
Nocturnal: "Even now, at the end, you bicker. How predictably mortal..."
Divayth Fyr: "She's here! Nocturnal!"
Nocturnal: "Why do you struggle so? Do you not see that it's hopeless? Sleep now... give in to the dark."
Divayth Fyr: "I can't hold it much longer! Get up, comrade! You have to turn the Skeleton Key! Now!"
Luciana Pullo: "I... will not yield! Go, friend― do as Fyr says! Unlock the throne! Free Sotha Sil!"

Upon activating the Skeleton Key, Sotha Sil will awaken and banish Nocturnal using his restored energy. Her shadow magic slowly retreats, returning the Throne Aligned to its normal state, and will leave saying a cryptic message:

Sotha Sil: "You trespass, Ur-dra. The Clockwork City shall bear your wait no longer.
Begone."
Nocturnal: "You achieve nothing, little godling. The Triad looms upon Summerset's shores. All that is shall be ours!"
Divayth Fyr: "Well done, my friend. Enough theatrics, Luciana. On your feet. Luciana...?"
Sotha Sil: "We should return to the surface. This is no place for mortals." 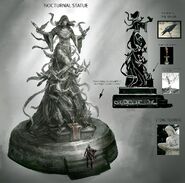 Early preview of Nocturnal's statue, showing detail of an altar with the Skeleton Key on it
Add a photo to this gallery

Retrieved from "https://elderscrolls.fandom.com/wiki/Nocturnal_(Online)?oldid=3050502"
*Disclosure: Some of the links above are affiliate links, meaning, at no additional cost to you, Fandom will earn a commission if you click through and make a purchase. Community content is available under CC-BY-SA unless otherwise noted.