For other uses, see Nord.

"Citizens of Skyrim, they are a tall and fair-haired people. Strong and hardy, Nords are famous for their resistance to cold and their talent as warriors. They can use a Battlecry to make opponents flee."
―Racial description[src]

Nords are a race that were led to Skyrim by Ysgramor. They are tall (standing at a scale of 1.03), fair-haired and pale skinned humans from Atmora who are known for their incredible resistance to cold and even magical frost. They are enthusiastic warriors, and act as soldiers, mercenaries, merchants and blacksmiths all over Tamriel. Eager to augment their martial skills beyond the traditional methods of Skyrim, they excel in all manner of warfare. Above all else in Nord culture is the quest for honor and glory, and a great emphasis is placed on family values. They thrive in the cold, reminiscent of their native Atmora, and are known as a militant people by their neighbors. Nords are also naturally superior at sea, and have benefited from nautical trade since their first migrations across the sea from Atmora. They captain and crew the merchant fleets of many regions, and may be found all along Tamriel's coasts. They issue a battle cry to make their enemies flee for a short time. Nords comprise the majority of the Stormcloaks, as well as the majority of the population of Skyrim.

In past games, Nords typically fared well as warrior, barbarian, or scout characters.﻿ They retain this advantage because of their specialization in both one-handed and two-handed weapons as well as light armor.

Their initial power (Battle Cry) makes most enemies flee for 30 seconds. This is extremely helpful when the player is overwhelmed by enemies that are of a slightly higher level than the player, and especially useful at lower levels. The Nords' bonus effect gives the player a 50% resistance to frost without having to equip enchanted apparel, such as Dukaan's or Otar's masks. This is of paramount importance when fighting mages or dragons that heavily rely on frost attacks. This starting power is superior to most other racial resistances, as many spells cast at the player are frost-based, although Thalmor Wizards tend to favor shock spells. Many intimidating, overwhelming enemies—such as leveled Falmer or Draugr—use these spells which can easily, without resistance, drain one's health.

There are many Scandinavian-sounding names such as Ralof, Ulfric, Rorik, Hadvar, Sven, Hod, etc. Many other names are reminiscent of other Germanic origins. Many Nords have surnames or clan names formed by an adjective and noun that are usually hyphenated (e.g. Black-Briar). Other Nord names involve descriptive epithets such as "the Fair." 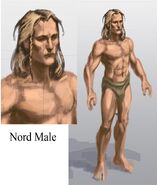 See more discussions >
Retrieved from "https://elderscrolls.fandom.com/wiki/Nord_(Skyrim)?oldid=3055652"
*Disclosure: Some of the links above are affiliate links, meaning, at no additional cost to you, Fandom will earn a commission if you click through and make a purchase. Community content is available under CC-BY-SA unless otherwise noted.