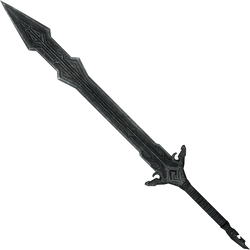 For other uses, see Hero.

Nord Hero Weapons are weapons that can be smithed at the Skyforge after talking to Eorlund Gray-Mane and completing "Glory of the Dead" from The Companions' main questline. Nord hero weapons cannot be crafted at a regular forge.

Nord hero weapons can be improved at a grindstone with steel ingots, and the improvement benefits from the Steel Smithing perk, which doubles the improvement.