Nord Winds is a weaponry, armor, and clothing shop in central Bruma run by Olfand and Skjorta. Olfand has 1000

and a Mercantile skill of 60. He offers repair services and basic training in Light Armor.

His wares include a unique cuirass Dondoran's Juggernaut which fortifies Strength and Endurance while draining Speed and Athletics. His wife Skjorta is a clothier with exactly the same amount of gold and Mercantile skill level as her husband. She should have been able to sell a unique Councilor's Hood, but she doesn't due to a bug.

The main trading room is on the ground floor and consists of three counters with a large selection of clothes, armor, and miscellaneous items on display. In the corner a small forge with an anvil along with a bellow and a furnace sits. The private quarters is locked along with the dining room and bedroom. 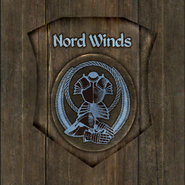 The Nords Winds sign
Add a photo to this gallery

Retrieved from "https://elderscrolls.fandom.com/wiki/Nord_Winds?oldid=2683457"
*Disclosure: Some of the links above are affiliate links, meaning, at no additional cost to you, Fandom will earn a commission if you click through and make a purchase. Community content is available under CC-BY-SA unless otherwise noted.