For other uses, see Tombs.

"Woe to the unwary explorer who delves deep into the burial crypts of the ancient Nords, and disturbs the Draugr that dwell within."
―Loading Screens[src]

Nordic Tombs are ancient Nordic burial sites spread throughout the province of Skyrim. Some tombs were also places of worship for Dragon Priests and Dragons, such as Bleak Falls Barrow,[1] Forelhost, and Skuldafn.[2] Some of these tombs were actual cities when they were first built, such as Labyrinthian/Bromjunaar, Korvanjund, Volunruud,[3] Saarthal,[4] and Ragnvald.

Tombs without a word wall[]

Most tombs house Word Walls, where a Word of Power is learned for use with Dragon Shouts, but there are some exceptions: 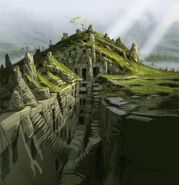 The exterior of an ancient Nordic tomb.

The interior of an ancient Nordic tomb.

Deutsch Español Nederlands Русский
*Disclosure: Some of the links above are affiliate links, meaning, at no additional cost to you, Fandom will earn a commission if you click through and make a purchase. Community content is available under CC-BY-SA unless otherwise noted.
Advertisement