For other uses, see Anequina.

"This region, also known as Anequina, merged with the southern region of Pellitine several centuries ago to form the province of Elsweyr. It's a patchwork that united many former small kingdoms, including Rimmen, Orcrest, Riverhold, and Meirvale."
―Northern Elsweyr loading screen[src]

Northern Elsweyr, also known as Anequina, is a region that appears in The Elder Scrolls Online: Elsweyr. It takes up the northern portion of the province of Elsweyr. The capital of the region is Rimmen.

The geography of Northern Elsweyr is remarked as being made up of windswept savannas, craggy desert canyons, and dense jungles.[1] 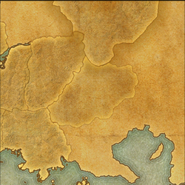 Northern Elsweyr on the map

Landscape
Add a photo to this gallery

Retrieved from "https://elderscrolls.fandom.com/wiki/Northern_Elsweyr?oldid=3097205"
*Disclosure: Some of the links above are affiliate links, meaning, at no additional cost to you, Fandom will earn a commission if you click through and make a purchase. Community content is available under CC-BY-SA unless otherwise noted.