9th Century of the First Era

Not to be confused with Southpoint.

"Though the shores here do not form an ideal harbor, Yric Flowdys knew the deep waters approaching them could easily accommodate large vessels, and that the location along the trade route made for a perfect way station where traders could resupply, make repairs, or shelter through storms. He constructed the first docks at Northpoint, the best anchorage, and named the port after it."
―Chancellor Regina Troivois[src]

Northpoint or North Point is one of the eight major kingdoms in the province of High Rock, being situated on the northern coast of the region of Rivenspire. Northpoint is the ancestral home of House Dorell, one of the three major houses of Rivenspire. The Dorell are experts in trading and maritime endeavors.

Northpoint is situated on the north-centralmost point of the province of High Rock, specifically in the Boralis coast of Rivenspire. Northpoint is situated on the summit of Dore Elard, a steady mountain overlooking the Sea of Ghosts. Underneath Dore Elard is the Smuggler's Tunnel, a large cove used by Pirates and other sorts of buccaneers. The outskirts of Northpoint is the Dorell Farm, which is owned by the same family of the Kingdom. Along the coast is Northsalt Village, which serves as a minor village and the city's harbor. There is a vast beach that surrounds Dore Elard and hills are found to the south. Northpoint is a walled-off city with a lighthouse jutting out towards the Sea. It has a fairly simple layout, with two entrances to the west and south. The main street goes straight from the south gate to the lighthouse, in the middle is the town square as well as the Dorell Manor. Deriving from there to the west will lead to the western gate. The Sloshing Tankard is the local inn, on the crossing between the north and west. Near the gates is a path that leads to each other, here are some homes and local businesses.

The city-state of Northpoint was founded by a Breton entrepreneur named Yric Flowdys, who made the summer route between the city-states of Daggerfall and Solitude. Flowdys had discovered Northpoint in the 9th Century of the first era, noticing the deep waters on the shores. Though it was not ideal for a harbor, it was capable of holding larger ships, and it was a perfect waypoint between two distant yet prevalent Kingdoms. It was there, Flowdys created Northpoint, to which it became an anchorage of the northernmost point of High Rock. After building the docks, Flowdys took to the hills of Dore Elard, where he built several warehouses and a small walled-off keep, near the port. As time went on, the settlement had grown in popularity, establishing Northpoint's hold in the land.[3]

Realizing the growing success of Northpoint, Yric Flowdys had adopted the name of Dore Elard, taking it as his family name, beginning the career of the Great House Dorell. Throughout the generations, the Bretons of House Dorell had continued in their maritime endeavors, as well as, establishing trade to their neighbors. They would then decided to expand on the mainland, in the Boralis Grasslands by leasing farmland and forming new sources of income. Northpoint had grown to the status of a city-state, and the ports would become the village of Northsalt. Northpoint had brought great prosperity to High Rock and the Sea of Ghosts, so much when in 1E 1029, Northpoint was named a Barony under the reign of Empress Hestra of the Alessian Empire. On the 24th century of the first era, the Great House Dorell had become one of the three great houses of Rivenspire, becoming the monarchs of Shornhelm. Northpoint was the second-largest settlement in Rivenspire.[3]

The Modern House Dorell in RivenspireEdit

During the Interregnum in 2E 582, the city-state of Northpoint was ruled by Lord Ellic Dorell, the son of Baron Alard Dorell, patriarch of the Great House Dorell. Ellic Dorell manages the House's holdings in Northpoint, as Alard was in Shornhelm with the Council of the North, where he maintains the Dorell Mansion in Shornhelm. Alard Dorell hopes to assume the rule as King of Rivenspire, but only time will tell. Northpoint and House Dorell had established a connection with the Nords of Solitude in West Skyrim. But around this time, Wylon Montclair had waged civil war with the Daggerfall Covenant and Emeric of Cumberland, continuing from where King Ranser had left off from King Ranser's War. Alard Dorell and Eselde Tamrith were able to retake Upper Shornhelm, but the conflict had grown to such severe rates. At this point, Ellic Dorell had begun acquainted with Lleraya Montclair, which ultimately proved both Ellic and Northpoint's downfall.[3]

With the death of Reezal-Jul, the Daggerfall Covenant had advanced to the north, towards Northpoint, which was taken control by Lleraya Montclair. Lleraya had possessed Ellic and imprisoned him in Dorell Manor, while Bloodfiends were roaming the streets of the city. An Agent of the Covenant had infiltrated the walled-off city through the Smuggler's Tunnel and the Northpoint Lighthouse. Using that path, the Covenant's Assault team had invaded the city, defeating the dead in the streets. The Agent was able to enter Dorell Manor, confronting Lleraya Montclair and the possessed Ellic Dorell. In the end, the spell was broken, and Lleraya was defeated. For letting the city fall into enemy hands, Alard Dorell had demoted his son's position as the leader. With Northpoint reclaimed, the Covenant had advanced deep into the Boralis coast, where they established a staging ground towards the summit of the Doomcrag, where Wylon Montclair was hold up in.[4][5]

Northpoint during the Imperial SimulacrumEdit

During the Imperial Simulacrum from 3E 389 to 3E 399, Emperor Uriel Septim VII was imprisoned along with Talin Warhaft in the Deadlands by Jagar Tharn. Tharn planned for months to capture the throne, and he was able to achieve so in ten years. Tharn had a powerful weapon called the Staff of Chaos, and he split it into nine pieces and scattered them across Tamriel, the staff was the only thing keeping Uriel Septim and Warhaft in Oblivion. A warrior escaped his clutches and traveled all corners of Tamriel to retrieve the missing pieces. The hero was known as the Eternal Champion, and he assembled the staff and defeated Jagar Tharn at the Imperial Palace. The Eternal Champion had at one point visited the city in their quest to recover the pieces. The city of North Point was under the rule of Queen Elana.[6]

During the waning years of the third era, the Kingdoms of Northpoint, Evermore, and Camlorn were waging war with each other, albeit they were minor skirmishes that have yet to explode into fully-fledged conflict. With the Warp in the West in 3E 417, both Northpoint and Evermore took advantage of the event, by absorbing minor nations amidst the conflicts. It was enough that they would not interfere with the Warp in the Iliac Bay or the War of Bend'r-Mahk in the Western Reach. As of 3E 432, both Kingdoms have grown quiet, waiting for their chance all the way into the fourth era. As of now, there is no information regarding their conflict. Because of Camlorn's allegiance with Daggerfall, it is likely that both Northpoint and Evermore were enemies of the western alliance of the Iliac Bay.[7] 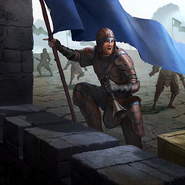 Northpoint Captain in Legends.
Add a photo to this gallery

Notice: The following are unlicensed references. They are not copyrighted by a ZeniMax Media company, but can still be considered part of The Elder Scrolls lore and are included for completeness.
Retrieved from "https://elderscrolls.fandom.com/wiki/Northpoint?oldid=2997308"
*Disclosure: Some of the links above are affiliate links, meaning, at no additional cost to you, Fandom will earn a commission if you click through and make a purchase. Community content is available under CC-BY-SA unless otherwise noted.