Due west from Solitude

Thalmor
Northwatch Keep is a partially-ruined fortress where the Thalmor are keeping Thorald Gray-Mane prisoner. In the Dawnguard DLC, the Icewater Jetty is located to the northwest of the keep.

The road to Volskygge (south of Northwatch Keep) leads to a seemingly dead end; however, there is an obscure path down the cliff, but it is easy to miss and will still require the Dragonborn to swim across an inlet; so the best route to get to Northwatch Keep is by following the shore from either the west or east. If traveling by means of the path, the Illusion spell Clairvoyance is helpful.

Upon arrival, the Dragonborn is greeted outside by a Thalmor soldier. He will tell the Dragonborn that they cannot enter the fort and that if they attempt to do so they will be met with violence. The Dragonborn cannot enter no matter who was sided with in the civil war and what rank they are. The only way for one to gain access to the keep is by force or the use of console commands.

The other prisoners can be released by picking Master locks, or flipping the levers in the room. However once freed, they just stand there. If their cell doors are open and a Northwatch guard attacks the Dragonborn then the prisoners will run out and help fight the guard. However, they will simply walk back to their cells after the guards have been defeated. Attempts to speak with them end with rude generic replies. 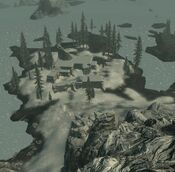 As seen from Cliffs Above