Northwatch Keep is a semi-ruinous fortress where the Thalmor are keeping Thorald Gray-Mane prisoner.

The road to Volskygge (south of Northwatch Keep) leads to a seemingly dead end; however, there is an obscure path down the cliff, but it is easy to miss and will still need the Dragonborn to swim across an inlet; so the best route to get to Northwatch Keep is by following the shore from either the West or East. If traveling by means of the path, the Illusion spell Clairvoyance is helpful.

When the Dragonborn arrives there, he or she is greeted outside by a Thalmor. He will state that you must be a member of the Imperial Legion to enter. If you are not an Imperial soldier, the Dragonborn may enter anyway, but they will start attacking him or her. He or she will then have to battle through the fort to free Thorald.

The other prisoners can be 'freed' by picking Master locks, or flipping the levers in the room. However once freed, they just stand there. Attempts to speak with them end with rude generic replies, which is probably an oversight on the developers' behalf.

In the Dawnguard DLC, the Icewater Jetty is just a bit North-West from here. 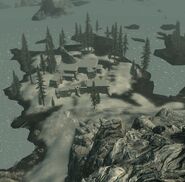 As seen from Cliffs Above

Guards "Preventing" you from entering
Add a photo to this gallery

Retrieved from "https://elderscrolls.fandom.com/wiki/Northwatch_Keep?oldid=974908"
*Disclosure: Some of the links above are affiliate links, meaning, at no additional cost to you, Fandom will earn a commission if you click through and make a purchase. Community content is available under CC-BY-SA unless otherwise noted.