Note to the Authorities is a book in The Elder Scrolls V: Skyrim.

I have heard talk about the Dragons, but didn't believe it until now. One flew by last week and ever since we have seen him fly back and forth from a nearby mountain peak. My wife thinks we should move away, go somewhere else. I told her that would be nonsense. As long as we don't bother it, it won't bother us. Still, I thought it would be best if we report it to the local authorities. The creature's lair is just south the hill behind our shack near Bear's Cave Mill. 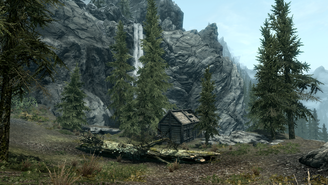 Location of the note
Add a photo to this gallery

Retrieved from "https://elderscrolls.fandom.com/wiki/Note_to_the_Authorities?oldid=3057480"
*Disclosure: Some of the links above are affiliate links, meaning, at no additional cost to you, Fandom will earn a commission if you click through and make a purchase. Community content is available under CC-BY-SA unless otherwise noted.