For other uses, see Ogrim.

Ogrim are large, reptilian, ogre-like Daedra in The Elder Scrolls III: Morrowind. It is said that they are chiefly sent to the mortal plane to menace living things for the amusement of Daedric Princes. Ogrim are associated with Malacath.[1]

Ogrims can be found at any levels in following locations:

They can be also found as leveled creatures. 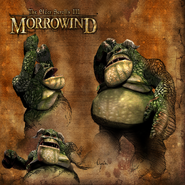 An Orgrim, as it appears on a loading screen. 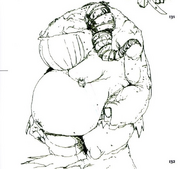 "Art of Morrowind" by Michael Kirkbride.
Add a photo to this gallery

Retrieved from "https://elderscrolls.fandom.com/wiki/Ogrim_(Morrowind)?oldid=3076768"
*Disclosure: Some of the links above are affiliate links, meaning, at no additional cost to you, Fandom will earn a commission if you click through and make a purchase. Community content is available under CC-BY-SA unless otherwise noted.