"Olav's Tap and Tack is a good, inexpensive place for travelers."
―Bruma Guard[src]

Olav's Tap and Tack is an inn in Bruma, near the Bruma East Gate. It has many patrons from the local area and some travelers.

Olav sells low to medium-quality drinks and a limited selection of foodstuffs. It costs 10

to rent a bed for the night.

A "vampire hunter" named Raynil Dralas moves to Bruma and kills a townsman accused of being a vampire. 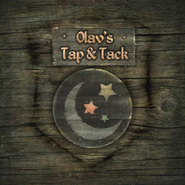 Retrieved from "https://elderscrolls.fandom.com/wiki/Olav%27s_Tap_and_Tack?oldid=2525697"
Community content is available under CC-BY-SA unless otherwise noted.