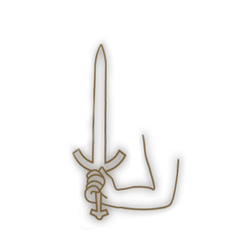 The art of combat using one-handed weapons such as daggers, swords, maces, and war axes. Those trained in this skill deliver deadlier blows.

"You're like me, eh? Don't fancy those clunky two-handed weapons."
―Hold Guard[src]

The One-Handed skill tree allows damage output to be increased by wielding two one-handed weapons simultaneously. This is referred to as "dual-wielding". While this potentially doubles damage output, it also removes the ability to block any attacks. It is advisable, though not necessary, to back up a dual-wielding play style with defensive skill trees, such as Heavy Armor or Restoration. An exploit for "dual-wielding" is to hold both attack buttons to perform a power attack but before it is performed press both the attack buttons again, which results in a stamina-free power attack. Alteration can also bring advantages by allowing the use of various forms of mage armor.

Despite not adding towards the One-Handed skill, unarmed attacks do benefit from some One-Handed perks, including the Dual Wielding perks. Perks from other skills that affect one-handed weapons (such as the Backstab perk from the Sneak skill) do not seem to affect unarmed attacks, however.

Your one-handed skill is very important.  It'll get you a long way in life, through the dark, lonely times.  A very long way.

This is a list of one-handed weapons that can be crafted at a Forge.

This is a list of weapons the cannot be crafted. They are either received as a quest reward or looted throughout the world. They may or may not be unique.

With very few exceptions, many of these can be upgraded at a Grindstone.

The following are the perks that become available to select as the skill is leveled up.

The One-Handed skill directly increases the damage dealt with one-handed weapons. For each skill level, weapon damage increases by 0.5%. This increase is multiplicative with bonus damage from the Armsman perk and weapon improvements.

One-handed weapons receive increased attack power from boots, bracers, necklaces and rings enchanted with the Fortify One-Handed enchantment. However, Daggers are uniquely unaffected by these enchantments.

Retrieved from "https://elderscrolls.fandom.com/wiki/One-Handed_(Skyrim)?oldid=1393068"
Community content is available under CC-BY-SA unless otherwise noted.