"From a distance, an orc may resemble a large, squat, muscular man - before the tusks become evident, and the green skin and the piggish eyes are seen. Usually, when the viewer is that close to an Orc, he or she is not taking notes about the details. Orcs are among the most common encounters around Iliac Bay, particularly around the southern half of the Wrothgarian Mountains. They are a consistently savage group, ready for a fight no matter the odds. Some rather eccentric researchers have suggested that the Orcs have a culture as ancient and sophisticated as ours, and that their seeming mindless barbarity is somehow related to rites of passage or tests of courage. It is highly likely that these researchers have never felt the sting of an orc captain's barbed axe."
―Official Daggerfall Player's Manual.[UL 1]

Orcs are enemies in The Elder Scrolls II: Daggerfall. They are not a playable race, and are considered creatures. 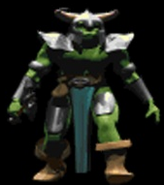 Orc Warlord
Add a photo to this gallery

Notice: The following are unlicensed references. They are not copyrighted by a ZeniMax Media company, but can still be considered part of The Elder Scrolls lore and are included for completeness.
Retrieved from "https://elderscrolls.fandom.com/wiki/Orc_(Daggerfall)?oldid=3077661"
*Disclosure: Some of the links above are affiliate links, meaning, at no additional cost to you, Fandom will earn a commission if you click through and make a purchase. Community content is available under CC-BY-SA unless otherwise noted.