For other uses, see Orcish Armor.

"Orcish armor, hmm? Had me a set of that once. Ugly and strong, like those that forged it."
―Hold Guard[src]

Orcish Armor is a set of heavy armor and is the fourth-strongest heavy armor available, followed by the ebony, dragonplate, and Daedric armors.

Unenchanted pieces of armor will begin to appear throughout Skyrim at level 20, and enchanted variants can be found at level 26. These locations include:

Orcish Armor requires a Smithing level of 50 and the Orcish Smithing perk to create. Pieces can be forged at a blacksmith's forge with the following components:

Pieces can be upgraded with orichalcum ingots at a workbench and also benefit from the Orcish Smithing perk, which doubles the improvement. 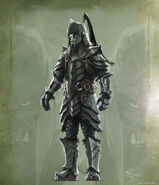 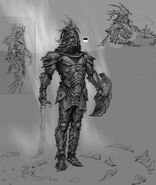 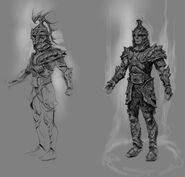