For other uses, see Orcrest.

"You who would enter Orcrest beware! Monsters abide within these walls. They are called by thirst for blood, and you would do best to travel elsewhere..."
―In-game description[src]

Orcrest is a city in Elsweyr. It is one of several possible locations that the Eternal Champion may discover in The Elder Scrolls: Arena.

Orcrest is connected to two settlements. To the north is Kings Walk, and to the south is Neumar Walk. 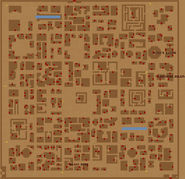 Orcrest local map
Add a photo to this gallery

Retrieved from "https://elderscrolls.fandom.com/wiki/Orcrest_(Arena)?oldid=3076582"
*Disclosure: Some of the links above are affiliate links, meaning, at no additional cost to you, Fandom will earn a commission if you click through and make a purchase. Community content is available under CC-BY-SA unless otherwise noted.