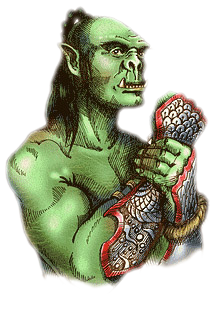 "The people of the Wrothgarian and Dragontail Mountains, Orcish armorers are prized for their craftsmanship. Orc troops in heavy armor are among the finest in the Empire, and are fearsome when using their berserker rage."
―In-game description[src]

Orcs, also called Orsimer ("Pariah-Folk"), are the large, green-skinned natives of the Wrothgarian Mountains, Dragontail, and Orsinium. Scorned for their physical appearances, Orcs are mistaken as uncivilized and barbaric, even called the "Tainted" or "Cursed" elves by their meri cousins.

Skill bonuses granted to Orcs make them excel at Warrior classes. Possessing much physical prowess, Orcs prefer to wield large two-handed Blunt weaponry. While these weapons swing very slowly and are quite heavy in weight, they are effective for staggering opponents, leaving them susceptible to additional blows. Using two-handed weapons while in Berserk is inadvisable, because Orcs are extremely vulnerable while in this stage; one hit from an enemy causes significant damage and dodging incoming blows is unlikely due to the Orc's stunted agility.

The innate Strength bonuses attributed to both male and female Orcs increases their encumbrance, allowing them to wield and carry heavier weapons and armor. Widely viewed as "unattractive" or even "frightening" to others, Orcs suffer from low Personality, making trading and intelligence gathering difficult for them. To offset their abundant physical skill, Orcs make inefficient mages and thus have reduced Intelligence.

Excelling at block, blunt, and heavy armor, the Orc functions well as a Warrior or barbarian. Orcish Knights do well in combat, but their Illusion and Speechcraft skills suffer due to the Orc's low Personality attribute. Praying at a Shrine of Dibella or Dibella's chapel in Anvil, daily, can recoup the loss. Orcs could also make effective Crusaders; their lack of proficiency in Destruction and Restoration can be offset by selecting The Mage, The Lady, or The Lord as birthsigns, however. The Atronach sign may also be considered as a more natural fit for the Orc, as it not only increases the character's magicka reserves, but allows for the Orc to absorb and resist enemy spells as well. The only downside would be the lack of natural magic regeneration. Praying to Julianos in his Skingrad chapel or wayshrines can help both Knight and Crusader Orcs overcome their magical deficiencies. Most popular for Orcs is The Warrior birthsign. It helps boost their Strength and Endurance for maximum starting fatigue and health.

Retrieved from "https://elderscrolls.fandom.com/wiki/Orsimer_(Oblivion)?oldid=3056261"
*Disclosure: Some of the links above are affiliate links, meaning, at no additional cost to you, Fandom will earn a commission if you click through and make a purchase. Community content is available under CC-BY-SA unless otherwise noted.