The Orsimer (more commonly known as Orcs), are the native people of the Wrothgarian and Dragontail Mountains. They are possibly a variant of elves or mer. Other sources state they are beastfolk. Following in the footsteps of Trinimac, and subsequently Malacath, Orcs have consistently held a standard as a race as some of Tamriel's greatest warriors and smiths.

"Orcs, also known as Orsimer, are natives of Orsinium, a small mountain kingdom between Hammerfell and Skyrim. It has been sacked and rebuilt many times."
―Loading Screens (Skyrim)[src]

Most orcs are found in strongholds throughout Skyrim, though some are seen in major cities such as Morthal and Markarth. The Dragonborn may enter, but cannot have conversation with the Orcs inside. Once you are near an Orcish Stronghold, a guard will tell you to stay away. You are allowed to enter the stronghold, but the Orcs dislike it, thus making conversation impossible until you become "Blood-Kin" by completing the quest the guard gives you. This quest varies per Stronghold. If the Dragonborn is an Orc, they will be accepted and may enter and engage in conversations without the need for prerequisite quests, though they will still treat the Dragonborn as an "outlander." However, if you are an Orc, as well as a vampire, then there will be a prerequisite quest. Orc strongholds tend to have a mine and blacksmith tools, which are usable regardless of whether the associated quest has been completed.

The Orsimer (Orcs) are the second tallest playable race in Skyrim, standing slightly shorter than Altmer (High Elves), at a scale of 1.0450.

"The people of the Wrothgarian and Dragontail Mountains, Orcish smiths are prized for their craftsmanship. Orc troops in Heavy Armor are among the finest in the Empire, and are fearsome when using their Berserker Rage."
―Racial description[src]

"No one bests an Orc" is the saying when Orcs fight their enemies and this is a justified claim. Orcs excel above and beyond in warrior roles. Their natural abilities fall under the warrior banner with the exception to enchanting, but this isn't outside of the realm of the warrior and is a trait commonly used by the wives of chieftains. With proper training this can easily give any Orc player character a needed boost in the game. The variety and extent of their skill bonuses make Orcs arguably the best pure warriors in the game. Two popular game play roles are as Tank or Blademaster, obviously focusing on use of heavy armor and respectively on shields and dual wielding over an Archer, Assassin or Mage-type role. Tie this into their racial Berserker Rage, and a tidy warrior is complete.

It is interesting to note that Orcs are the warriors of the Mer bloodlines. They alone excel under the warrior constellation focusing more on brute strength over cunning, speed and magic like the rest of the Mer. Interestingly enough, an Orsimer is head of the Arcanaeum at the College of Winterhold. 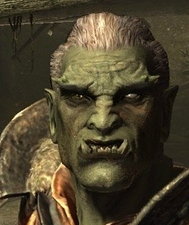 An Orc fighting the Dragonborn.

An Orc inside a dungeon.

An Orc in the Wilderness.

An Orc in Orcish armor. 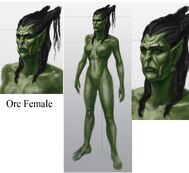 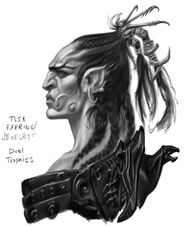 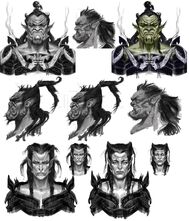 Čeština Deutsch Español Suomi Nederlands Polski
*Disclosure: Some of the links above are affiliate links, meaning, at no additional cost to you, Fandom will earn a commission if you click through and make a purchase. Community content is available under CC-BY-SA unless otherwise noted.
Advertisement