Legendary
Summon: Put three random Shouts into your hand and reduce their costs to 0.

For other uses, see Paarthurnax.

Paarthurnax is a creature card in The Elder Scrolls: Legends that is a part of the Heroes of Skyrim expansion.

Paarthurnax's Summon ability makes him ideal for decks that make use of Shouts or Action synergies. While he can be used in other decks, the inherent randomness in his ability makes Paarthurnax less consistently impactful than Odahviing, who has a reliable board-clear ability and better stats.

Word Wall can be used to upgrade the Shouts received from Paarthurnax. They can also be used to power up Young Dragonborn or fuel Action-based abilities like Lillandril Hexmage, Mages Guild Retreat, or Shimmerene Peddler. 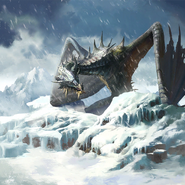 Retrieved from "https://elderscrolls.fandom.com/wiki/Paarthurnax_(Legends)?oldid=3004976"
*Disclosure: Some of the links above are affiliate links, meaning, at no additional cost to you, Fandom will earn a commission if you click through and make a purchase. Community content is available under CC-BY-SA unless otherwise noted.