The Palace of Vivec is a location in The Elder Scrolls III: Morrowind. It is the southernmost canton in Vivec City. It is the home of the mortal form of the god-hero Lord Vivec, the warrior poet, one of the three deities of the Tribunal. Vivec spends his time here overseeing the Tribunal Temple, keeping a watchful eye on the people of Morrowind. A long series of steps leads to the Palace entrance, which is locked by a powerful spell, as Vivec only grants audiences to a very select few visitors.

The Shrine of Generosity can be found atop the steps of the Palace of Vivec. If a donation of 100

is made at the shrine, one receives the Palace Blessings: Fortify Mercantile and Fortify Luck, 10 points for 48 minutes.

The Nerevarine must go to the Palace of Vivec in Vivec City and instead of acquiring Wraithguard as a gift from Vivec, they must instead kill him and retrieve the Unique Dwemer Artifact from Vivec's Corpse.

The Nerevarine must complete the Pilgrimages of the Seven Graces in order to obtain further quests from the Tribunal Temple. The quest can be obtained simply by reading a copy of The Pilgrim's Path, which can be found across Vvardenfell or from any Tribunal Temple quest giver (such as Endryn Llethan). Once started, the Nerevarine may visit the shrines in any order, which will be marked on the Nerevarine's map.

The following books can be found at the back of the palace: 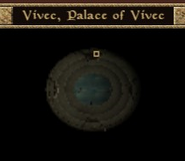 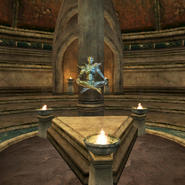 Vivec in his palace
Add a photo to this gallery

Retrieved from "https://elderscrolls.fandom.com/wiki/Palace_of_Vivec_(Morrowind)?oldid=2959545"
*Disclosure: Some of the links above are affiliate links, meaning, at no additional cost to you, Fandom will earn a commission if you click through and make a purchase. Community content is available under CC-BY-SA unless otherwise noted.