Pale Pass is a snowy area north of Bruma and south east of Falkreath in Skyrim. To get there, one must go through the dangerous Serpent's Trail.

The pass was originally the site of an Imperial fort that was taken over by the Akaviri during the Akaviri Invasion of 1E 2703. However, the war ended and supplies never reached them. To reach the garrison itself, travelers had to travel up the Grey Ridge.[1]

The fort is now in a state of decay and is infested with undead Akaviri soldiers. The quest "Lifting the Vale" requires the Hero to retrieve the Draconian Madstone from the fort.

The pass is also host to its own type of Ogre, the Pale Pass Ogre Stonewrecker.

In 4E 201, the Pale Pass was closed due to avalanches in the mountains. This prevented Imperial reinforcements from helping to secure Falkreath Hold under Imperial control during the Stormcloak Rebellion.[2][3] 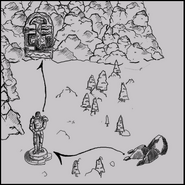 Retrieved from "https://elderscrolls.fandom.com/wiki/Pale_Pass?oldid=2922933"
*Disclosure: Some of the links above are affiliate links, meaning, at no additional cost to you, Fandom will earn a commission if you click through and make a purchase. Community content is available under CC-BY-SA unless otherwise noted.