The Paragon Platform is an unmarked location in The Elder Scrolls V: Dawnguard. It is a small, partially destroyed but still functioning, magical platform in the Forgotten Vale where the Paragons found on Frost Giants are used to open portals to secret locations in the Vale. If a Paragon has been used in the platform, it can be taken out and switched with another.

Once in the Forgotten Vale, enter the Wayshrine of Resolution. From there, travel due east. After crossing over a hill, straight ahead (and slightly left) across the river will be a cave with a Frost Giant. Climb down the cliff toward it, then turn back around. The Paragon Platform is across the river from the cave, against the cliff.

There are five paragons, each opens a portal to a different location. 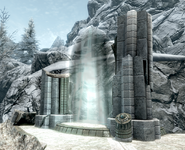