Animunculi
Passage of the Walker is a sublocation of the Dwemer Ruin of Bamz-Amschend in The Elder Scrolls III: Tribunal. This area of the ruin is initially reached via a blocked passageway connected to Radac's Forge. The Nerevarine must clear the way with some explosives which can be found in Radac's Forge and the Hall of Winds. The corridors lead to King's Walk without many turns or distractions. There is only a single chamber that is not directly upon the path from Radac's Forge to King's Walk. The entrance to the ancient Daedric shrine of Norenen-dur is also hidden here behind rubble from a collapsed passageway where once again the Nerevarine must make use of the explosives.

There are three leveled animunculi here: 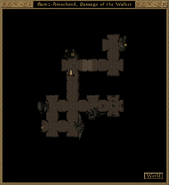 Local map.
Add a photo to this gallery

Retrieved from "https://elderscrolls.fandom.com/wiki/Passage_of_the_Walker?oldid=3056017"
*Disclosure: Some of the links above are affiliate links, meaning, at no additional cost to you, Fandom will earn a commission if you click through and make a purchase. Community content is available under CC-BY-SA unless otherwise noted.