See below
Pelagiad is a small town located on the road between Seyda Neen and Balmora in the Ascadian Isles region of Vvardenfell. The town is home to its namesake, a small Imperial Legion facility, Fort Pelagiad. Limited Imperial Cult services are provided at the fort. The architecture is continental and reminiscent of High Rock with thatched cottages and a single high street. It is conveniently located near a lake and plantations, and features a tavern, smith and pawnbroker.

The town area was originally settled by ex-Legionnaires who bought farmland at their retirement, clustered around the fort. Their presence attracted merchants and other services until Pelagiad grew to the size of a small town. It was built sometime after the Planemeld.[1]

At one point, the Nerevarine escorted an Altmer researcher to Pelagiad for access to his research notes in a Mages Guild quest; accounts vary as to whether or not the researcher reached his destination safely, among other miscellaneous, minor quests. The Nerevarine also searched a nearby ancestral tomb for a skull as a favor to an unrelated Mages Guild member. 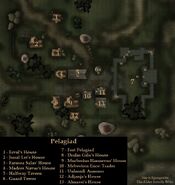 Retrieved from "https://elderscrolls.fandom.com/wiki/Pelagiad?oldid=3103624"
*Disclosure: Some of the links above are affiliate links, meaning, at no additional cost to you, Fandom will earn a commission if you click through and make a purchase. Community content is available under CC-BY-SA unless otherwise noted.