For other uses, see Perks.

Perks are a feature introduced in The Elder Scrolls V: Skyrim.

Every time a level is gained, a point is granted to spend on a perk. However, points do not need to be used immediately; they can be saved for use later if the Dragonborn does not have the Skill Level required to have that perk.

Skill prerequisites aside, most perks for a given skill depend upon a previously obtained perk. The exception being the starting perk, that must be obtained first in order to obtain any other perks for that skill. The skills of Destruction, Restoration, Alteration, Heavy Armor, Sneak, Lockpicking, Pickpocket, and Speech all have a perk dependency structure that is similar to a rooted tree. Hence the term, perk tree.

Perks are detailed on the individual skill pages, along with their requirements.

There are 251 perks in the game. Originally, there was a level cap of 81, which meant a maximum of 80 perks could be acquired. As of patch 1.9, this limit has been lifted with the addition of Legendary Skills. This addition grants the ability to level up past 81 by resetting skills trees back to level 15. Doing this gives back perk points spent on the skill to use on other locked perks while also letting the Dragonborn level up and upgrade their health, magicka, or stamina indefinitely. One can have all two-hundred and fifty-one perks by level 252.

With the addition of Dragonborn add-on, and after completing the quest "At the Summit of Apocrypha" the player is granted the option to refund all the perks points in any Skill tree at the cost of one Dragon Soul. The perks are returned and can be spent elsewhere. This can be done to each skill tree as many times as liked so long as the player has Dragon Souls to spend. The player can return to the area any time they want by reading the Black Book: Waking Dreams anywhere on Solstheim.

The following are the perks that become available to select as the skills are leveled up: 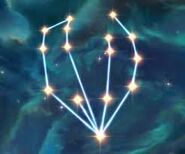 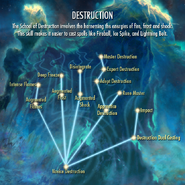 A fully upgraded Destruction tree.
Deutsch Español Italiano 日本語 Русский
*Disclosure: Some of the links above are affiliate links, meaning, at no additional cost to you, Fandom will earn a commission if you click through and make a purchase. Community content is available under CC-BY-SA unless otherwise noted.
Advertisement