The following sections divide up the Pocket Guide:

Being a Description of the Lands and the

Divers Customs of the Inhabitants 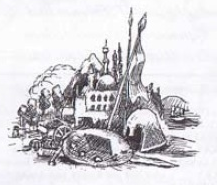 and furthermore a useful history of those places

of interest by Nature of their Locations & Influence.

To the unswerving Commitment to Truth and Knowledge

of His Most Discerning Majesty the Emperor Tiber Septim

Promulgated under the Authority of the Imperial Geographical Society 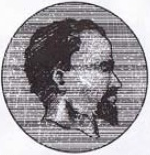 Scion of Emperors, King of Earth and Sky,
Lord of Shining Hosts,
Protector of Oathman, Feeman and Yeoman,
Guarantor of Right and Justice,
Broad Blessing of Thrones and Powers,
Cynosure of Celestial Glory,
The Most High Tiber Septim

The 8 Invocations and 16 acceptable Blasphemes.

To AKATOSH whose Perch from Eternity allowed the Day.
To KYNARETH who returns the Masculine Breath.
To DIBELLA who pays Men in Moans.
To ARKAY who braves the Diminuendo.
To JULIANOS who incants the Damned Equation
To MARA who fills the Empty and drains the Stones.
To ZENITHAR the Provider of our Ease.
To STENDARR who suffers Men to read. 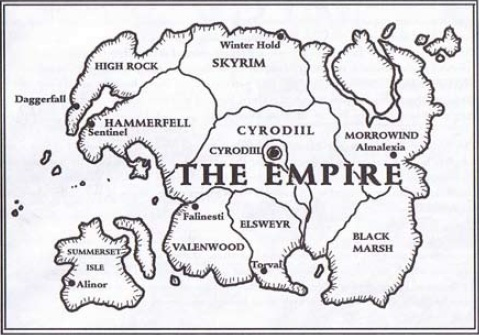 With the dawn of a new era before us, it is time that we take stock of where we have been and where we are, in order to better illuminate the way ahead. Written in celebration of the Battle of Hunding Bay, which marked the return of all human kingdoms to the unchallenged rule of the Cyrodilic Emperor, this pamphlet seeks to briefly describe the present provinces of the Empire and the surrounding regions-- their history, people and current condition. We strove to balance timeliness with accuracy and completeness; if we have erred in our zeal to place this valuable guide in the hands of interested citizens everywhere, we beg the kind reader's indulgence.

The Empire stretches across Tamriel, the largest known continent of the World. To the north of Tamriel is Atmora, from whence the Men of the World came. To the west is Yokuda, the lost native land of the Redguards. To the east is Akavir, whose armies invaded Tamriel in the previous era. To the south all is mystery and the whisper of a lost Elven homeland.

Tamriel itself is generally divided into eight major regions: Skyrim, Cyrodiil, High Rock, the Aldmeri Dominion of the Summerset Isles and Valenwood, Hammerfell, Morrowind, and the Elsweyr Confederacy. Some of these, such as Morrowind or Skyrim, have historically been unified into kingdoms; others, such as High Rock or Elsweyr, are looser groupings of many kingdoms, chiefdoms, village confederations, and so forth, united under a dominant race or culture. At its zenith, the Second Empire formally organized these disparate groups into the Imperial Provinces, which were administered by provincial governors, either dispatched directly from Cyrodiil or appointed from the native populations. (Morrowind is a notable exception, having never been conquered by the original Cyrodilic Empire and, thus escaping investment as an Imperial Province.). With the fall of the Cyrodilic Empire, control reverted to the individual rulers of each province, resulting in centuries of chaos, as many of the provinces devolved into independent kingdoms and petty statelets. Now, happily, all of the human kingdoms have been recovered by the Third Empire of Tiber Septim, and once again they all bear the proud title of Imperial Provinces.

The Aldmeri Dominion, the Elsweyr Confederacy, and Morrowind have yet to join the Empire, but are described in this book for the edification of the scholar, the fascination of the common citizen, and the preparation of the soldier. The Third Empire is yet in its youth, and who can predict what new horizons might yet greet the dawn under the Red Diamond Banner?

Some regions escape provincial classification due to the primitive civilization of their beastfolk inhabitants. Collectively, these beastfolk 'states' are known as the Wild Regions, which may or may not be of interest to the Emperor. They are included only for the most intrepid of travelers, and to throw the achievements of Civilization into more brilliant relief by contrast with these benighted corners of Tamriel.

Now, citizen, we entreat you to review our modest survey of the Empire's dominions. If it entertains and edifies, reflect not upon the humble labors of this scribe, but on the gracious benevolence of our beloved Emperor, whose very name is as ambrosia upon our tongues, who in his wisdom has ordained that this survey be created and distributed among the earnest and wise people of Tamriel, that they might better understand the glories and challenges of these Lands and Dominions, and that they might better appreciate the great burdens of rulership he bears in our names with such fortitude.

A note on Elven designations: The Elves as a whole are sometimes referred to as the 'Aldmeri,' or 'the Elder Races.' Their individual pedigrees are likewise referred to by both their human and Aldmeri names; thus, High Elves are the 'Altmer,' Dark Elves the 'Dunmer,' Wood Elves the 'Bosmer,' etc., etc. 'Mer' is also used to denote a single Elf. Words that designate an Elven member of a profession or trade can therefore correctly be said as 'craftsmer,' for example, or 'noblemer.'

Čeština Español Français Italiano Polski Русский
*Disclosure: Some of the links above are affiliate links, meaning, at no additional cost to you, Fandom will earn a commission if you click through and make a purchase. Community content is available under CC-BY-SA unless otherwise noted.
Advertisement