For other uses, see Potato.

Potato is a food item available in The Elder Scrolls IV: Oblivion.

It is harvested from the potato plant, which is found on many farms throughout Cyrodiil. Once harvested, they can either be eaten as food, or used as ingredient for alchemy.

There are a total of 430 samples which can be found across Cyrodiil, which will regenerate several days after being harvested. Some locations with the highest numbers of samples are:

The following are farms with a significant number of potato plants: 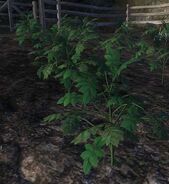 Potato plant
Add a photo to this gallery

Retrieved from "https://elderscrolls.fandom.com/wiki/Potato_(Oblivion)?oldid=2851893"
Community content is available under CC-BY-SA unless otherwise noted.