Praetorian Commander is a creature card in The Elder Scrolls: Legends that is a part of the Heroes of Skyrim expansion.

Praetorian Commander can be purchased as part of the Ancano's Cunning deck or purchased alone for 400 soul gems.

Praetorian Commander should be summoned as soon as possible due to its ability. However, due to its low health and attack, this card is not particularly useful on its own. Summoning it when losing is not a wise move, as it is too weak and too expensive to help immediately on its own. 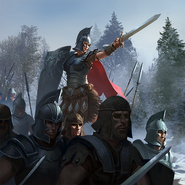 Retrieved from "https://elderscrolls.fandom.com/wiki/Praetorian_Commander?oldid=2929183"
Community content is available under CC-BY-SA unless otherwise noted.