Priests of Order are residents of the Shivering Isles that have rejected madness and taken up the cause of order.

Priests of Order are masters in destructive magic and usually attack with mostly spark and fire spells. They will also raise their fallen brethren from the dead during combat.

They wear robes and hoods that cover their entire bodies, as well as enchanted jewelry such as amulets and rings to enhance their magical abilities.

They prefer to attack with magic, using their crystal staves. They will continue to resurrect until the Obelisk of Order has been deactivated.

If one attempts to search their bodies before the Obelisk is completely deactivated, the Hero will take Shock damage. Unlike the Knights of Order, the priests' robes can be taken and equipped.

They are often found near Obelisks of Order, summoning the Knights of Order into the world. They are capable of repairing Obelisks that have been deactivated. 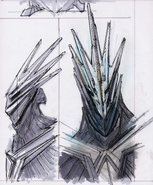 Early concept art of a Priest of Order

Early concept art of a Priest of Order

Retrieved from "https://elderscrolls.fandom.com/wiki/Priest_of_Order?oldid=2935888"
*Disclosure: Some of the links above are affiliate links, meaning, at no additional cost to you, Fandom will earn a commission if you click through and make a purchase. Community content is available under CC-BY-SA unless otherwise noted.