Reaper's March, formerly known as Northern Valenwood,[1] is an embattled zone to the north of Grahtwood where the northern savannahs of Elsweyr meet northern Valenwood's forests. It is home to the cities of Arenthia, Rawl'kha, and Dune. The lattermost city is the home of the Mane,[2] the Khajiiti spiritual leader.[3]

"Once known simply as Northern Valenwood, this region that borders Cyrodiil and Elsweyr has seen so much bloody warfare since the fall of the Second Empire that it's now known as Reaper's March, even to its battle-scarred inhabitants."
―Loading screen[src]

Reaper's March is a region frequently subject to conflicts and wars between the Khajiit, Bosmer and Colovian Imperials who occupy the three-sided border. Although separated by the Strid River, Colovian cities such as Kvatch often make incursions into the areas surrounding the border cities.[4] Despite concerted attempts to control the Northern Woods centralized through the occupation of Arenthia, Colovian forces would be forced to retreat to Cyrodiil by the Aldmeri Dominion and organised Khajiit resistance forces.[5]

In 2E 582, the Order of the Black Worm, working through the Stonefire Cult, would attempt to advance the progress of the Planemeld in Reaper's March before being defeated by the Vestige and their allies.[6] Concurrently, the Dark Mane, the spirit of an ancient disgraced Mane, was unleashed by the dro-m'Athra.[7] His return would serve as a trial to determine which of the twins, Shazah or Khali, would become the new Mane and spiritual leader of the Khajiit.[8] The resolution of the crisis would serve to unify the races of the Dominion.[9]

The following are locations accessible in Reaper's March and, with the exception of unmarked locations, are discoverable on the map. Points of Interest serve as locations with unique side quests, while cities serve as the centralised areas with multiple sublocations and act as a hub for services and merchants. Explanations of the types of locations are provided in the main locations page.

Sixteen Skyshards can be found in Reaper's March totalling in five skill points with one left over. The zone guide provides clues as to the location of each Skyshard, but many can be found simply by exploring and watching for the distinctive pillar of light they emit.

Twenty-nine books that are a part of Shalidor's Library can be found in Reaper's March and added to the collection. Books that have already been found in other zones will already be marked as completed in the zone tracker.

A Dark Anchor in Reaper's March. 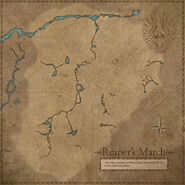 A map of Reaper's March.

An overlook of Reaper's March.

Reaper's March loading screen.
Add a photo to this gallery

Retrieved from "https://elderscrolls.fandom.com/wiki/Reaper%27s_March?oldid=3165004"
*Disclosure: Some of the links above are affiliate links, meaning, at no additional cost to you, Fandom will earn a commission if you click through and make a purchase. Community content is available under CC-BY-SA unless otherwise noted.