The Legend of Red Eagle

Draugr
Rebel's Cairn is a cave in The Elder Scrolls V: Skyrim.

Rebel's Cairn is located in The Reach near the top of the bluff northwest of Rorikstead before reaching the Sundered Towers. The cave is a tomb and is the final resting place for the legendary Red Eagle, a hero to the native Forsworn.

A miscellaneous objective to find Red Eagle's Sword, which is given to the Dragonborn upon reading The Legend of Red Eagle.

Upon locating the sword, one must find and slay Red Eagle himself. Upon reaching the tomb, the sword acts as the key to opening the inner chamber where he restlessly awaits. The quest to discover the secret of Red Eagle's tomb may be completed multiple times, but the player will only face Red Eagle himself the first time.

Red Eagle can raise his undead brethren to fight alongside him and is capable of disarming. These undead are on a timer, and will eventually be released, making the fight easier. Upon death he drops a Honed Ancient Nord Greatsword of Burning as well as being able to remove Red Eagle's Sword from the keystone thus yielding a transmuted version of itself and resealing the tomb.

Rebel's Cairn is also a great location to gather alchemical fungi. There are 66 fungi able to be harvested:

It also contains 2 Lavender plants, 2 Nordic Barnacle clusters, and 1 Slaughterfish Egg cluster; in the first room, just by the brazier, an adventurer mostly-buried in the ground can be looted. 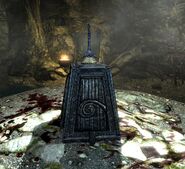 The floor and walls of the main chamber depicts an ancient Nordic mural of the eagle.