The most naturally talented warriors in Tamriel, the dark skinned Redguards of Hammerfell seem born to battle, though their pride and fierce independence of spirit makes them more suitable as scouts or skirmishers, or as free ranging heroes and adventurers, than as rank and file soldiers. In addition to their cultural affinities for many weapon and armor styles, Redguards are also blessed with hardy constitutions and fleetness of foot.

Hammerfell, the Redguard's homeland, had recently survived a massive invasion by the Aldmeri Dominion. Though they were aided by the Imperial Legion, the following peace treaty gave a large chunk of the region to the elves. The Redguards refused to accept those terms, and succeeded in reclaiming their homeland from the Dominion, which lead to the separation of Hammerfell from the Mede Empire as an independent nation. There is now distrust between the Redguard and the Imperials.

The main religion of Hammerfell is a mix between ancestor worship and faith in the traditional Yokudan pantheon. According to Trayvond the Redguard, in Hammerfell, they "don't much like spellcasters, because Wizards steal souls and tamper with minds. If you use magic, you're weak or wicked." They are not fond of Conjuration -- they don't like ghosts, relating it to Necromancy --and Illusion (because it alters the mind). However, he does mention that he and other Redguards are rather fond of Destruction spells, as they suit their culture well.

Like previous Elder Scrolls games, the Redguards excel in combat. In Skyrim they are more magically inclined than Nords or Orcs, unlike Oblivion or the earlier games.  With Orcs as a possible exception, they make for the best defensive fighter due to having the best starting skill in One-Handed in addition to their skill in Block. Their poison resistance helps to withstand deadly poison of any kind, while the Adrenaline Rush ability allows for a continuous offensive onslaught. The Alteration tree allows them to learn defensive mage spells, allowing them to forge armor to travel lighter or to immobilize their enemies as a spellsword.

Most Redguard names are based on Arabic names, such as Nazir ("observer"). This largely differs from previous installments where Redguard names were commonly of western European origins. 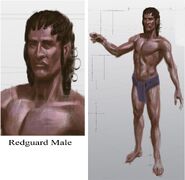 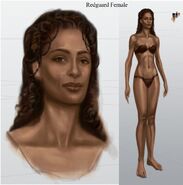 Redguard female concept art
Add a photo to this gallery

Retrieved from "https://elderscrolls.fandom.com/wiki/Redguard_(Skyrim)?oldid=1511818"
Community content is available under CC-BY-SA unless otherwise noted.