Legendary
After an enemy rune is destroyed, deal 1 damage to your opponent.

Relentless Raider is a creature card in The Elder Scrolls: Legends.

This card is best played in combination with a creature with high power, such as Odahviing. Especially when all three copies of this card are in use. Using Doppelgangers to create copies of this card is also a great strategy. Using this combo, Odahviing deals 10 damage, and the six Relentless Raiders (three of which are doppelgangers) would then deal enough damage to kill the opponent. 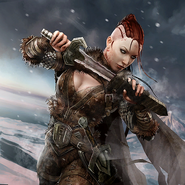 Retrieved from "https://elderscrolls.fandom.com/wiki/Relentless_Raider?oldid=3004773"
*Disclosure: Some of the links above are affiliate links, meaning, at no additional cost to you, Fandom will earn a commission if you click through and make a purchase. Community content is available under CC-BY-SA unless otherwise noted.