Edit
watch 02:17
New Pokemon Games - The Loop
Do you like this video?
Play Sound

Revered Dragons are a variant of dragon introduced in The Elder Scrolls V: Dawnguard. They begin to appear throughout Skyrim at about level 33–59.

They are orange with blue dorsal markings, and have wide, flat ridges that run the length of their body and tail, beginning at the back of their skull. Revered dragons have beaked avian mouths and a distinct lack of teeth, which sets them apart from the rest of their kin. They also have large, lidless frog-like eyes, which are larger than those of most other dragons.

Revered dragons have the ability to use the Drain Vitality shout, like Legendary Dragons.

Two unique revered dragons named Naaslaarum and Voslaarum can be fought in the Forgotten Vale during or after the quest "Touching the Sky." These dragons can be encountered before the required level.

They are found guarding a word wall for the Drain Vitality shout. During this fight, these dragons will dive into the frozen lake, resurfacing at other points. They are the only dragons known to be capable of doing this.

Along with Dragon Bones, Dragon Heartscales, Dragon Scales, gold and gems, Revered dragons also have a chance to drop Daedric weapons and armor. 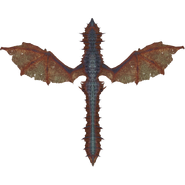 Top-down view of a revered dragon.

Members of the Blades fighting a revered dragon.

A side view of a Revered Dragon.