"Some call them the Falmer, claim they are related to the other elves[...] Some are intelligent enough to speak, but they speak only nonsense."
―A member of the Skaal[src]

The Rieklings are small creatures inhabiting the colder northern and northwestern regions of Solstheim.

They have blue skin and sharp teeth; they're very short. They are usually found in packs. One notable weapon used by Rieklings is the Riekling Spear, which appears to be the head of a wolf punctured by a long sharp pole.

The Skaal of Solstheim, believe the Rieklings to be descendants of the Falmer,[1] although the Skaal themselves do not affirm this with certainty.

They are commonly found in the whole northern half of Solstheim, except in the Skaal Village.

There are several unique Rieklings that can be encountered, either during quests or exploration:

The Riekling Raiders are known to use Tusked Bristlebacks as mounts, thus moving much faster, and dealing larger amounts of damage in battle.

The following is the list of all items that may be looted from a Riekling: 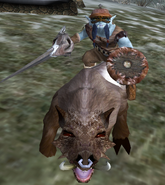 Fighting a group of Rieklings
Add a photo to this gallery

Retrieved from "https://elderscrolls.fandom.com/wiki/Riekling_(Bloodmoon)?oldid=2951743"
Community content is available under CC-BY-SA unless otherwise noted.