Rieklings are creatures that appear in The Elder Scrolls V: Dragonborn. They are native to Solstheim and tend to live in small tribes in caves, ancient ruins and even mountain peaks. They are hostile in nature, but individually pose a minor threat. They typically rely on strength in numbers and a small group can quickly overwhelm an enemy.

"Rieklings have little culture of their own, but scavenge what relics they can from around Solstheim and form strange attachments to what they find."
―Loading screen

Riekling society has a tribal structure, with tribal members holding specific occupational positions such as hunters, scouts and warriors. Strength is highly respected: the strongest member of a tribe typically assumes the rank of chief, and succession is often determined by a fight to the death between the incumbent chief and a challenger claiming to be of greater strength. This bears similarities to elements of Orsimer culture, especially that of Mor Khazgur. A non-Riekling may assume the position of chief if they have the support of the tribe, but this is exceptionally rare.[1]

Riekling settlements give insight into their level of intelligence, which corresponds roughly to a stone age society: they have developed simple tool-crafting and elements of rudimentary language and religion, and have domesticated bristlebacks, which they raise for food and use as mounts. Characteristics of Riekling religion include the "Godspeak Song" and the construction of shrines, but there do not appear to be any shamans or other religious leaders. At least one Riekling is known to have learned to speak the common tongue.[1]

They are known to hoard seemingly random items, from empty bottles and platters to armor and weapons, which they have stolen or scavenged from the Dunmer, Nords or even Dwemer. They also occupy settlements such as halls and mines after driving out or killing the previous inhabitants, and make use of non-Riekling items such as barrels for shelter and storage.[1]

The Chief of Thirsk Hall[]

During this quest, an intelligent riekling chief is encountered in Thirsk Mead Hall. He asks the Dragonborn to perform a series of favors that culminates in an attack on the former owners of the mead hall. After completing the quest, the Riekling tribe of Thirsk Mead Hall recognizes the Dragonborn as their leader, and several members will become available as followers. In addition, upon finishing the quest, groups of three Rieklings of any rank may be randomly encountered throughout Solstheim and Skyrim either in the open world or within dungeons, aiding the Dragonborn in combat.

Once the Dragonborn becomes an honorary Riekling Chief by finishing the above quest, the Rieklings from Thirsk Mead Hall can be recruited as followers. They can follow basic commands and their inventory can be accessed, but they are still considered pets and therefore may be hired alongside a humanoid follower(s). Thus, they are useful as pack mules, and can be given equipment to be more efficient in battle than other pets such as Armored Trolls or Dogs (though they will still not use healing potions). They are more proficient in Light Armor, but equipped apparel are not visible on their bodies.

Rieklings recruited at Thirsk Mead Hall have different ranks and will appear depending on the level of the Dragonborn. Common Riekling, Scout, Hunter and Warrior can be differentiated by the amount of clothing and facial hair they have. These Rieklings prefer ranged combat and will equip bows and arrows given to them. They will have riekling spears as their default weapon when first recruited, and will resort to unarmed combat if ammo is depleted. With a bow equipped, arrows and spears will be depleted but they will do more damage. When equipped with a single arrow without a bow, they will generate infinite ammo but will not do as much damage as they would with a bow. In battle, they will utilize spear animations, meaning they hold a bow in one hand, and throw arrows with their other.

Other Rieklings that show up to aid the Dragonborn in random encounters can be recruited as well; they will wear feathered headdresses regardless of their rank. As followers, they will instead equip Greatswords (also utilizing spear animations while held) and may be able to mitigate damage by blocking attacks.

"Rieklings may be small in stature, but they attack in swarms and can be fearsome in melee combat. They are even known to tame and ride boars into battle."
―Loading screen[src]

Rieklings are rarely found alone and tend to rely on superior numbers to overpower foes. They use spears as their primary weapon in both melee and ranged combat.

Some Rieklings fight while mounted on bristlebacks, which are also used to charge at their foes. They also use ambush tactics to surprise an unsuspecting enemy by bursting out of barrels and other objects used for storage. Despite their small stature, Rieklings are fierce combatants and will rarely retreat from combat.

Rieklings can be found in the following locations. With the exception of Thirsk and random encounters, they are usually hostile, regardless of whether or not the Dragonborn finished the associated quest(s) in their favor; however, when encountered, friendly Rieklings will still fight against them for the Dragonborn.

All variants use both ranged and melee combat as enemies, but followers will still have the associated ranks.

The Chief of Thirsk Hall

Rieklings found at the Beast Stone will recite Miraak's Mantra in their own language:

A Riekling Island on Solstheim.

A group of Rieklings bowing to a horse-drawn cart inside the cave Frossel. 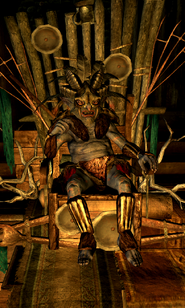 A Riekling Mine on Solstheim.

A Riekling outpost outside a Dwemer Ruin.

A Riekling Hut besides a box.