"Riften was a major hub of activity for trade caravans and travellers to and from Morrowind. Fishing skiffs could be seen dotting the lake at all hours of the day and the bustling city was alive with activity at night. The city guard was formidable and maintained a tight grasp on its populace, keeping them safe from harm. The marketplace in Riften was also quite a draw, containing numerous stands offering wares from across Tamriel."
―Dwennon Wyndell[src]

Riften or Rifton[1] is one of the nine major cities in the province of Skyrim, being the capital of the Rift. Riften is a built along the shores of Lake Honrich, made from wooden platforms and serving as a main hub of trading throughout the Rift and the Southern Velothi Mountains. The lower canals are used as ports for skiffs moving throughout the lake.

Riften is situated in the heart of the Rift, the southeastern forest of Skyrim. It is on the eastern shore of Lake Honrich, in the minor region of the Smokefrost Peaks located on the base of the Velothi Mountains. The Riften outskirts are primarily farmland, utilized mainly by the Nords of the Snow-Shod Clan and other ancestral families of the Rift. The city limits in the north are mostly used for this purpose, as it is covered in a natural barrier that divides the North Rift. Local militias of the Rift have also used this area as an encampment. Merryfair Farm is one of the more well-known farms to use this district. The north road that leads into Fort Greenwall has been used by Riften as another line of defense after Greenwall. The southwest road is not as heavily used in Skyrim, with only other settlement in that direction is the townships of Nimalten and Ivarstead. To the road to the east goes into Morrowind to the settlements of Silgrad Tower and Fort Virak.

Riften city itself is somewhat small, for the layout is limiting. It is centered around a stone foundation where the market square is located. A canal runs around the square, where fishing skiffs use to dock their ships and sell their produce. Larger vessels utilize the Riften Docks on the outside of Riften walls. On the docks are the Black-Briar Meadery and the Riften Fishery. Much of the city's produce comes from this area, where they would be distributed to surrounding areas. The greater city surrounds the canal in Riften, and the main street runs through it. Between the north and south gates are the Riften chapters of the Fighters Guild and Mages Guild, as well as, the Mistveil Keep, the current seat of power for Riften. The back streets run along the eastern wall, with a small graveyard and a secret entrance to the Ratways. The Ratways are the local sewers of Riften, more commonly known by the population of the Empire as the Riften Outlaws Refuge. The Thieves Guild of Skyrim supposedly operate in the Ratways.

Amidst the Second Akaviri Invasion in 2E 572, Jorunn the Skald-Prince had traveled to Riften with his entourage, the Pack of Bards, during their travels throughout the continent, visiting cities such as Sutch and Mournhold. When news of Windhelm's fall had reached Riften, Jorunn and the Pack of Bards cut a bloody swath to the city-state of Windhelm, where he and his brother, Fildgor Strong-Prince fought against the Kamali under the command of Ada'Soom Dir-Kamal. They were unable to save their mother and sister, as the Palace of the Kings was razed. In the end, Dir-Kamal's forces moved south towards Morrowind and Jorunn was proclaimed High King through a Traditional Nordic Duel over his brother.[4][5]

Seeking aid, Jorunn traveled to High Hrothgar, where he was given the Ashen Familiar of Wulfharth, to aid him in his fight against the Akaviri. Jorunn and Wulfharth rallied their forces at the city-state of Riften, where Wulfharth's presence inspired the Nords. As Dir-Kamal saw Riften in the horizon, he witnessed waves of Angry Nords, and promptly avoided them, advancing into Morrowind through Virak Pass. The Nordic Army followed suit, where they joined the Dark Elves in their fight at the Battle of Stonefalls. After a cunning victory with the Dunmer and Argonians, the Ebonheart Pact was formed, and Riften was integrated into their forces, along with Eastern Skyrim.[5][6]

In his Wake; the Worm Cult & Sinmur the Terrible[]

During the Interregnum in 2E 582, the city-state of Riften was ruled by Thane Viri, who was forced to rebuild her beloved city after the resurrection of Sinmur the Terrible. The ghostly spirit of the Giant Chieftain had demolished Riften, leaving the northern wall open to the environment. Captain Viveka of the City Guard helped survivors while the Temple of Mara healed them. The Order of the Black Worm had made their presence fully-established in the region, waging a minor war with the Ebonheart Pact. Sinmur was ultimately brought back at Arcwind Point, after Thallik Wormfather was killed and fused with Sinmur's spirit. In response, the Pact had resurrected ancient members of the Five Hundred Companions, Hakra and Valdur to combat this apparition. As the Pact rebuilt Riften, an Agent of the Pact investigated the city for activity from the Worm Cult. It was revealed that Anchorite Garmar of the Worm Cult, had founded a shard of Wuuthrad on the shores of Riften, attempting to recover it in the Cult's plot. He was swiftly defeated, and the shard was given to the Companions, who operated in Fallowstone Hall in the north. Riften became the staging grounds for the final battle at the peaks of Trolhetta in the south.[7][8]

The young Barenziah had escaped her home at Darkmoor, eventually traveling to the east with her friend, the stable boy, Straw. After talking up the job of caravan guard, the two arrived in the city-state of Riften at sixteen, where they met a Khajiiti thief named Therris, who eventually brought Barenziah into the Thieves Guild. Therris proposed a heist, where they would break into an Imperial Commandant's estate, by the request of a traitor to the Empire. This failed as the Imperial Commandant was Symmachus, who recognized the young Barenziah. After disposing of Straw and Therris, Symmachus took Barenziah into Morrowind, via the Silgrod Tower checkpoint on the border. The two returned to Mournhold, where Barenziah inherited the throne of Mournhold after several years of being away.[9][10][11]

Riften during the Imperial Simulacrum[]

During the Imperial Simulacrum from 3E 389 to 3E 399, Emperor Uriel Septim VII was imprisoned along with Talin Warhaft in the Deadlands by Jagar Tharn. Tharn planned for months to capture the throne, and he was able to achieve so in ten years. Tharn had a powerful weapon called the Staff of Chaos, and he split it into nine pieces and scattered them across Tamriel, the staff was the only thing keeping Uriel Septim and Warhaft in Oblivion. A warrior escaped his clutches and traveled all corners of Tamriel to retrieve the missing pieces. The hero was known as the Eternal Champion, and he assembled the staff and defeated Jagar Tharn at the Imperial Palace. The Eternal Champion had at one point visited the city of Riften in their quest to recover the pieces. The city of Riften was under the rule of King Bjis.[12]

During the Void Nights in 4E 98, Hosgunn Crossed-Daggers became the Jarl of Riften after the previous one had been assassinated through unknown means. Many believed that Jarl Hosgunn was responsible, and so many took to the streets and protested, to which he took immediate action. The Jarl utilized the City Guard and issued a curfew, much to the dismay of the people. If anyone broke it, then they were jailed, should it happen again, they would be executed. Hosgunn Crossed-Daggers ruled for forty years with an iron fist, and a blackened heart, imposing ridiculous taxes on anyone who tried to make business in Riften. Ultimately in 4E 129, the people were at their breaking point, as they overwhelmed the city guard, hungering for blood. The Jarl took refuge in his castle, which was built within seven years with lavishing accessories. The riot had burned down the castle, with both the Jarl and the city destroyed. It took five years to rebuild Riften, but it was a shadow of its former self, a shanty town of filth. But for many years, hope for the prosperous Riften was still in the hearts of the people, even now.[13]

Riften during the Skyrim Civil War[]

During the Skyrim Civil War in 4E 201, the city-state of Riften was ruled by Laila Law-Giver, who was in competition for power with the Thieves Guild of Skyrim, who held significant power in Riften, albeit not as much as it did prior. With the Stormcloaks waging war with the Imperial Legion, Jarl Law-Giver, and by extension, the city-state of Riften allied with Ulfric Stormcloak of Windhelm. Despite this, she does not have a lot of faith in Ulfric's movement, with her son, Saerlund having a great dislike against the Stormcloaks. While the Stormcloaks operated out of Windhelm, the group in the Rift worked in Mistveil Keep under the command of Gonnar Oath-Giver. Beyond the capital city, the Stormcloaks utilized Fort Greenwall in the northern pass near Riften. Maven Black-Briar, the matriarch of the Black-Briar Clan has massive control over Riften, with strong ties to the Thieves Guild.[14]

The Thieves Guild & their Rise to Glory[]

At the same time, the Thieves Guild of Skyrim, whose presence in Riften has existed since the second era, has lost a significant amount of their influence but has retained their holdings in Riften through their friends of the Black-Briar Clan. Their guildmaster, Mercer Frey, was once a member of the Nightingales, a group of highly-skilled thieves that worship Nocturnal, the Daedric Prince of the Shadows. Frey had murdered the Guild's previous leader, Gallus Desidenius and framed the death of his associate, Karliah, a descendant of Barenziah herself. Karliah worked in the shadows to defame the Thieves Guild until Karliah was proven innocent and Mercer was killed deep in the ruins of Irkngthand. Ever since, the Thieves Guild had expanded their influence, as far as, the city-state of Solitude. This renaissance had ushered a new era for the Thieves Guild in Skyrim.[15][16][17][18]

The Inner Sanctum of Mistveil Keep.

The Temple of Mara in Riften. 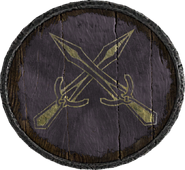 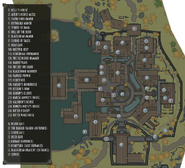 Notice: The following are unlicensed references. They are not copyrighted by a ZeniMax Media company, but can still be considered part of The Elder Scrolls lore and are included for completeness.
Беларуская Español Polski Português Русский
*Disclosure: Some of the links above are affiliate links, meaning, at no additional cost to you, Fandom will earn a commission if you click through and make a purchase. Community content is available under CC-BY-SA unless otherwise noted.
Advertisement