For other uses, see Riften.

Riften, referred to as Rifton in earlier records,[1][2] is a city situated in the southeastern corner of the Rift, at the eastern end of Lake Honrich, with a good portion of the city actually spilling over the water atop large wooden piers. It is the easternmost of all the cities in Skyrim. 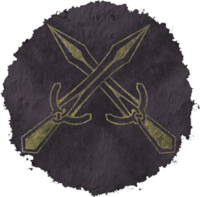 Queen Potema fled to Riften after the evacuation of Mournhold. It originally served as a trading hub for travelers both to and from Morrowind.[3]

In 4E 98, Hosgunn Crossed-Daggers became the Jarl, which he ruled with an iron fist for forty years,[3] until 4E 129, when the people of Riften began an uprising against his tyranny.[3] Now, Riften's Jarl serves on the Stormcloaks' side of the civil war between the Empire and the Rebels (Stormcloaks). Riften also serves as a base for the infamous Thieves Guild, which live in the Ratway below the city.

The entire city is bisected by a large canal that used to serve as access for small cargo boats, but lately has fallen into disrepair, decay and stagnation thanks to the lack of trade during the Civil War. Despite this, Riften remains a bustling centre of commerce; the Black-Briar Meadery has a near monopoly on the sale and distribution of a Nord's favorite pastime: drinking.

The city is located in the beautiful Autumnal Forest region of Skyrim, and that beauty has encroached upon the city, in the form of wondrous foliage and generally pleasant, if not sometimes overcast weather. But most of Riften's structures are wooden, and the city gives off an old and run-down feeling, which often takes visitors by surprise. Not that this bothers the residents, who see Riften for what it truly is - a bustling, energetic city with a strong economy fueled by hard-working fishermen and mead makers. Despite the fact that the current Jarl in office is Laila Law-Giver, the residents understand that the city is, for all intents and purposes, actually owned and operated by Maven Black-Briar, and in order to survive and thrive, one needs to adhere to her rules. Maven's hold over the city is so great, that in the event of Imperial victory, Maven takes the position of Jarl, remarking it only as a title.

Despite the city's economic strength, it holds a darker side. The notorious home of the Thieves Guild in Skyrim, Riften also sees much corruption in the form of Maven Black-Briar, especially when dealing with rivals. Many poor residents frequent the less desirable areas, and thieves both Guild and freelance take advantage of the frequent mist, dark alleys and the Canal, preying on travellers and citizens alike. Such conditions reflect on the city; deaths are common, and people will often fight in the street over dropped items.

The northern, eastern and southern edges of the city, built on the shore of Lake Honrich, are called Dryside. The bulk of the town's residence sits on Dryside, and is split from the western edge known as Plankside, by the Riften canal. Most of the more affluent homes are located on the eastern edge of Dryside, as well as the Temple of Mara, while the southern portion of the city holds the Honorhall Orphanage and the Mistveil Keep.

The western edge of the city is known as Plankside, built on the waters of Lake Honrich, and serves as the city's business district. The market, shops, meadery, fish hatchery and Bee and Barb Inn are all located on Plankside;  essentially Dryside is residence while Plankside is business. The buildings here have been built atop of wooden docks, and the district is old and ramshackle. There are three main docks projecting from Plankside onto the lake, one owned completely by the Black-Briar Meadery and the other two used for commerce and fishery.

The Riften Canal is the lower level of the city; small residences and an alchemy shop are built into the moisture ridden stone. Dark and traversed only along rickety catwalks, the canal is avoided by the more affluent citizens of Riften, as it is a common place for muggings and foul play. It also contains the entrance to The Ratway, the city under the city.

Riften is notorious for being the home of the Thieves Guild, and residents urge travelers away from the sprawling tunnel system. If successfully navigated, one might find the Ragged Flagon, the headquarters of the Guild. However, that would mean crossing the dark and tight tunnels, and avoiding those too dangerous or outcast not to warrant residency in Riften proper or membership in the Guild.

Upon approaching the city gates, the Riften guards attempt to make the Dragonborn pay a "visitor's tax", which varies according to level. With a high enough speech skill, however, they can persuade or intimidate the guard. If recognized that "this is obviously a shakedown", the guard tells the Dragonborn to "keep this quiet", and go on ahead.

These guards are suspected to be accomplices of Brynjolf, as he later addresses the Dragonborn with full knowledge of the scam call out. To avoid the situation entirely, one can have themselves arrested and jailed in Riften, or sneak in through the meadery, or by pickpocketing the guard's gate key. Also, if a dragon attacks while in speech with the guards, they will run to attack the dragon and the Dragonborn can get inside after the fight while the guards are walking back to their post.

There are also town guards guarding the docks. These guards can't be persuaded or even bribed to be let in, directing the player to the north gate.

After entering the city, the Dragonborn will be greeted by Maul, who will say "I don't know you, you in Riften lookin' for trouble?". If the Dragonborn replies with "I'm not scared of you,", Maul will tell them "That's the wrong answer", followed by instructions to keep out of the Black-Briar business.

The house in Riften (Honeyside) costs 8000

and can be bought from the steward, Anuriel, after Jarl Laila or Maven Black Briar approves. This approval is gained by performing deeds for Riften's citizens.

A misty evening in Riften

Riften Market
Add a photo to this gallery

See more discussions >
Retrieved from "https://elderscrolls.fandom.com/wiki/Riften_(Skyrim)?oldid=1464388"
*Disclosure: Some of the links above are affiliate links, meaning, at no additional cost to you, Fandom will earn a commission if you click through and make a purchase. Community content is available under CC-BY-SA unless otherwise noted.